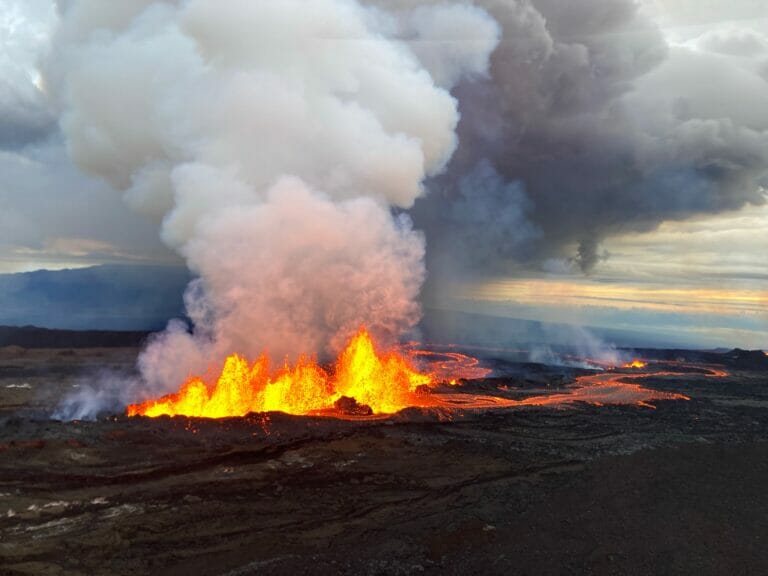 The volcano started erupting on Sunday night, and lava was visible on its summit by Monday morning. As of Monday morning, the lava has begun to flow down the northern slope.

According to the U.S. Geological Survey, “Lava flows are not threatening any downslope communities and all indications are that the eruption will remain in the Northeast Rift Zone.”

Their statement, however, did warn that “Volcanic gas and possibly fine ash and Pele’s Hair may be carried downwind.”

Pele’s hair refers to volcanic glass that forms when lava cools into thin fibers. These fibers are often carried by the wind across the surrounding area. They are named for the Hawaiian goddess of volcanoes, Pele.

Experts are not currently concerned about the safety of the Southeast Rift Zone, which has a higher community population. The Scientist in Charge at the Hawaii Volcano Observatory Ken Hon reported “As far as we know, in any historic precedence that there has never been an eruption of Mauna Loa that activated both rift zones at the same time or during the same eruption.”

“So we presume at this point that all of the future activity is gonna be on the Northeast Rift Zone and not on the Southeast Rift Zone. So those residents in that area do not have to worry about lava flows,” he continued.

Mauna Loa last erupted in 1984. During the 1984 eruption, its lava came within 4.5 miles of the settlement of Hilo.

Hon reports that the current eruption is following a pattern remarkably similar to the 1984 pattern that threatened Hilo. Hilo is home to almost 45,000 people and is Hawaii Island’s largest population center.

Hon noted that it would be approximately a week before lava approached anywhere near Hilo. “We’re hoping that it [the lava flow] will parallel the 1984 eruption in becoming more viscous as times goes on and hitting flatter slopes that slow it down, and this actually prevented the lava from getting into Hilo,” Hon said.

Despite the expectation of low risk, lava flow patterns can change quickly. The U.S. Geological Survey and the Hawaii Volcano Observatory have cautioned all residents on the Big Island of Hawaii to stay up to date on local guidance and policies regarding emergency responses.

On Monday afternoon, the emergency operation center was activated, according to Major General Ken Hara of the Hawaiin Emergency Management Agency. Hara also reported that Hawaii’s National Guard was on standby.

Mauna Loa rises an outstanding 13,679 feet (4km) above sea level. Even more impressive, the volcano rises 55,700 feet (17km) from its base on the sea floor. The Hawaiian name “Mauna Loa” means “Long Mountain.” The name is apt, as the volcano reaches 74 miles (120km) from the volcano’s southern edge, across the caldera, to the Hilo coastline.

The volcano has erupted 33 times since scientists first began documenting its activity in 1843. This makes it one of the most active volcanoes globally. In addition to frequent eruptions, Mauna Loa produces immense quantities of lava. Lava flow from Mauna Loa’s eruptions has reached the Pacific Ocean eight times since 1868.

Interested in reading more about the latest updates in the global environment? Click here to read about Java’s recovery efforts following the recent 5.6 magnitude earthquake that left their community reeling.