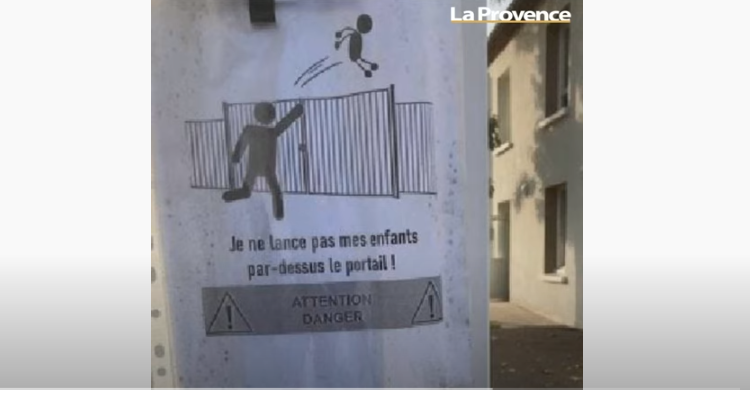 School mornings are difficult enough as it is, but I’ll be damned if after all the hassle I won’t shove my kid into the classroom myself!

An elementary school in France has recently had an interesting series of recurring events: parents were seen launching their children over the school’s 1.8m barred gates after they had closed before the start of lessons at 8:30 am.

One, two, three children were seen flying overboard to make it into their class on time.

So much so, that the school has been required to kindly remind the parents that if their children arrive after the gates close, to NOT resort to catapulting them onto school grounds like the committed paternal cannons they are.

So now, the Trillade School in Avignon has signs outside their gates decorating the grounds with interesting allure: a cartoon of a parent booting their child over the fences and a kind reminder informing them to only let their kids in when the gates reopen at 10am and 3pm. You’d think such signs wouldn’t ever be really necessary…

Thankfully, there were never any injuries just very chaotic viewings of enough children to require a reminder – the school’s principle Sanaa Meziane told La Provence.  She mentioned it is usually the case for parents who also do not want to be late for their job, which is very respectable considering the difficulties of parenting and working at the same time.

I’m certain the children didn’t mind that little adrenaline adventure all too much, either. Definitely a sure way to jump-start your mornings!

It’s interesting to learn how differently school’s are run around the world, such as this Chinese school that’s using attention tracking headbands on their students to make sure they are focused.

In this article:france, funny, News, school