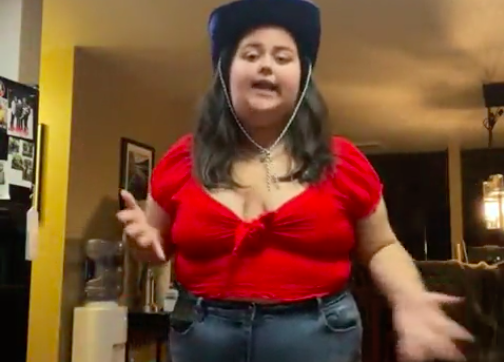 TikTok user @miagravess was called to jury duty in September. Deciding she didn’t want to go, Mia chose her outfit with the goal of being dismissed.

Her TikTok, which now has racked up over 6.8 million views and 1.4 million likes, was posted the day before she had to appear for jury duty.

In the video, she says:

‘I have jury duty in the morning. Just found out I literally have to show up. I’ve pushed it off twice and I do not want to go. So, I’m going to try to put together an outfit that just screams “Send that b***h home!”’

Mia then goes on to showcase all her outfit options.

What were the outfits?

The first, which she calls a ‘menace to society’ themed outfit contains a 3XL t-shirt that reads ‘I love shoes, booze, and boys with tattoos.’

In the TikTok, Mia says this outfit ‘screams I have terrible judgment and shouldn’t be a juror.’

Alongside this top, Mia wore pink crocs, because, as she says, they ‘really seal the deal that I should not be trusted.’

The second outfit aimed to make Mia look like a cowboy. She said she wanted to look like ‘a walking distraction.’ With short-shorts and a revealing top, Mia announced her intention to ‘show as much cleavage as possible, lots of leg.’

Mia explained her reasoning behind this.

‘The whole idea is overqualified, like if I showed up and other jurors saw me in this fit they would be intimidated and want to go home, therefore they’re gonna send me away because I am just better than everyone.’

For the final outfit, Mia wore a frat t-shirt, leggings, and knock of JB slides. She paired this with smudged mascara so she looks ‘disheveled/unwell.’

To go full method acting, she considered ‘show[ing] up sobbing.’

Did Mia get sent home from jury duty?

Mia’s plan worked. She posted a follow-up TikTok that announced she had been sent home from jury duty.

In the video’s caption, she said she went with the first option (the “shoes, booze, and boys with tattoos” monstrosity). In the video, she’s wearing a sweater over it, but she reassured viewers this was just because of the temperature.

For other people who have gone to extreme lengths, why not check out the Japanese café who are creating stunning 3D latte art?