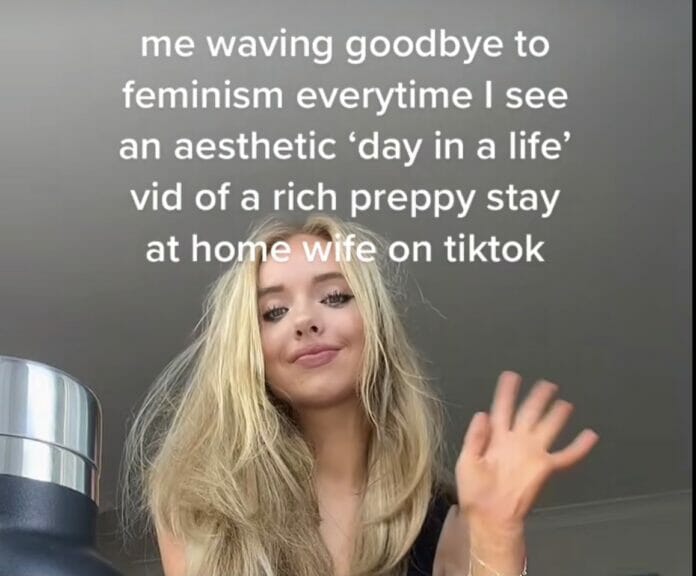 TikTok has exploded with videos of young women leaving employment to become ‘stay-at-home girlfriends’. These influencers glorify the “womanly” lifestyle and trigger feminist concerns in the process.

What is a ‘Stay-at-home Girlfriend’?

This year TikTok has been inundated with influencers like @kendelkay with 500,000+ followers sharing their lives as “stay-at-home girlfriends”. These women condense their daily life spent doing domestic tasks and looking after their boyfriends into an appetizing package advertised to millions of young women. Unlike the more common stay-at-home wife, stay-at-home girlfriends are young 20-somethings without children or a husband who are performing the same home-making role. Whilst women should be able to make their own decisions about how to live their life, are there some seemingly unassuming dangers to this new phenomenon? I spoke to Dr Morgan Anderson (@drmorgancoaching) a clinical psychologist and relationship expert to find out more.

One of the major differences between a stay-at-home wife and a stay-at-home girlfriend is the lack of legal or financial stability through marriage. There is a real danger for young women who are not utilizing their 20s in the workplace as a lack of work experience can significantly affect future job prospects if ever needed. Unless the stay-at-home girlfriend has proficient savings it is a deeply precarious financial position to impose upon oneself. After all, not all relationships work out. What do you have to show for the years you spent home-making for your boyfriend? Whilst domestic work is still work and I don’t wish to discredit that, it is not paid work and in the Capitalist model in which we live, everyone needs financial independence to keep themselves safe. Dr Morgan adds,

Personally, as a survivor of narcissistic abuse, I find it potentially harmful to financially depend on a partner that you have not established a securely attached, loving long-term partnership with. [However] there are ways partners can contribute to the relationship that are not financial, and if both contributions to the relationship can be valued, there may not be any harm in depending on one partner for financial safety.

This is where one of the dangers of stay-at-home girlfriend content lies. These TikTokers do have jobs; they are influencers who are profiting off of a ‘fake’ lifestyle. Perhaps because, in not earning any money for oneself, the reality is potentially far less aesthetically pleasing. Without money, these women do not have ultimate freedom and without marriage, they do not have a legal share of their spouse’s earnings either.

Is it healthy for one partner’s life to completely revolve around the other? Whilst many couples around the world do operate in this way, is it beneficial to either partner for young women to prioritize their spouses’ lives over their own? Medical News Today defines co-dependency as:

A person who is codependent will plan their entire life around pleasing the other person, or the enabler.

In its simplest terms, a codependent relationship is when one partner needs the other partner, who in turn, needs to be needed.

Co-dependency can promote unhealthy relationships as in its extreme form, one partner’s main sense of worth comes from sacrificing themselves for their partner, whilst the partner enjoys the results of the sacrifice and enables them to continue. I think there is a real risk of co-dependency in a stay-at-home girlfriend lifestyle as the women’s sole role is to look after her husband with less thought to her own desires. Dr Morgan explains

We cannot become our partner’s personal assistant, caretaker, or support person without anticipating that resentment would eventually build up. Resentment leads to the death of a relationship… A relationship should support each individual in growing more as an individual; not losing themselves in the relationship.

The potential co-dependency at play can only be exacerbated by a lack of financial independence making it near impossible for women to leave their relationships.

After generations upon generations of feminist efforts, is the stay-at-home girlfriend trend an example of a 21st Century retaliation against the 80s ‘Career Woman’?

One movement that has built in momentum, perhaps culminating in this ideal of the stay-at-home girlfriend is the idea of ‘divine feminine energy’ and the desire for a feminine ‘soft life’. These terms are often used to criticize modern feminism for pushing women into a workplace that women are not naturally “suited” to. Supposed traditional stereotypes reinforce the notion that there are natural, biological differences in the disposition and characters of men and women with women suited to the home and men to outside workplaces.

However Dr Morgan instead suggests that the stay-at-home girlfriend trend is in reaction to failed parental relationships of prior generations. She says,

I think they are seeing it as a way to create healthy relationships. Likely they had women in their life who were hyper independent and they saw that love didn’t work out for them in their lives, so women today are living out the opposite extreme. The whole, “I won’t be like my parents” frame that often causes us to sabotage our lives and relationships if we’re not careful.

Influencers are allowing young women to aspire to an unattainable goal by not showing the realities of a domestic life: cooking, cleaning, laundry and, a potentially troubling relationship… 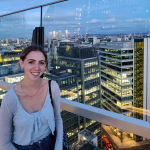