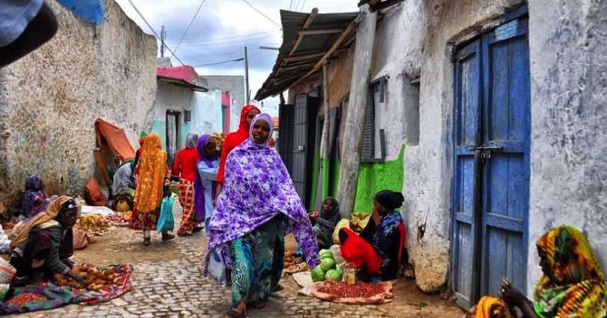 National Geographic has outdone itself this time. Every year, the magazine publishes a list of “must-do” trips around the world over the next 12 months. And this year’s selection is perhaps the best lineup yet.

The magazine – specializing in cartography, geography, and exploration – just unveiled its picks for destinations to see in 2018. From Argentina to Ireland, Australia to South Korea, this list is sure to satisfy your wanderlust for the next year.

Take a look below at just a few of the stunning sights that make up our globe.

The magazine recently dubbed Harar “the most surprising city in East Africa”. Europeans usually do not travel to that region of Africa, preferring instead to visit the easily accessible North African countries. They may just have to venture out of their comfort zones, however, because this destination is too stunning to miss.

Harar boasts 110 mosques and several hundred shrines. The city is recognized by UNESCO as the fourth holy city of Islam. Home to phenomenal local beers, the finest coffee, and khat (a euphoria-inducing amphetamine-like stimulant that comes from a flower), Harar is impressively enticing.

Hyenas mark another motivation to visit the region (yes, you read correctly). As National Geographic writes,

“The city welcomes crowds of hungry hyenas every night which are given spare food scraps by the city’s ‘hyena men’.”

You definitely can’t see that in just any petting zoo…

The next destination on the list is Jujuy – a province of Argentina located deep in the northwest region of the country. The impressive Quebrada de Humahuaca mountain range stands here.

Deep canyons are situated nearby filled with looming cacti and surrounded by the enormous Quebrada peaks. In 2003, UNESCO designated Jujuy a world heritage site. In Purmamarca, located in the southern region, you can see the breathtaking Seven Color Hill. The landmass combines sediment colors of yellows, reds, greens, and purples to produce a shimmering rainbow tone across its hills.

Not into hiking or environmental sightseeing? The Georgian capital, Tbilisi, flaunts a lively cosmopolitan scene. National Geographic includes Tbilisi in the list for its “authentic charms”. Specifics? Sulfur swims at the city’s many public bathhouses, khinkali spiced meat dumplings, and generous hospitality to name a few.

Sydney is no stranger to National Geographic’s lists, having garnered spots in numerous publications over the years. The city, Australia’s largest, is included once again thanks to major renovations recently done to its iconic opera house. The $273 million upgrades gave the venue’s one thousand rooms a modern facelift as well as brand-new acoustics enticing visitors to return for years to come.

Lastly, Oaxaca, Mexico is another must-see destination this coming year. Located 300 miles from Mexico’s capital, Oaxaca has long been known for its Day of the Dead festivities.

The other 364 days of the year, the city offers hundreds of local markets that sell items from prehispanic woven textiles to agave plant-based alcohol Mezcal. Want some sun? The region is home to relaxing beach spots perfect for that Instagram-worthy selfie.

None of these places still not your cup of tea? Take a look below at the complete alphabetized list of National Geographic’s must-visit locations of 2018. There is sure to be a spot for everyone:

For a complete rundown of each destination, check out National Geographic’s official rankings here.

See the magazine’s unreal “photo of the year” that debuted over the summer.