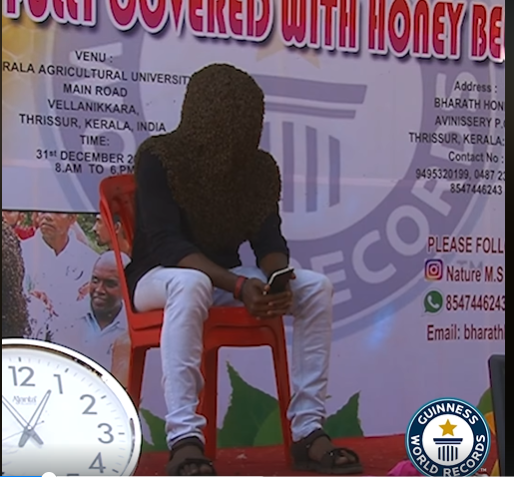 An Indian beekeeper claims that bees are his ‘best friends’ and trusts them to the point where he lets 60,000 bees cover his entire face.

24-year-old Nature MS is a beekeeper from Kerala, India who regards bees as his ‘best friends’ and says they are not a threat to him. He even went on to win the Guinness World Record for the “longest duration with head fully covered with bees”.

Nature attempted this record to raise awareness of the importance of honey bees and apiculture.

He said he’s always had a fascination with bees and has let bees crawl and cover his face since he was just 7 years old. He considers bees his best friends and doesn’t see them as a threat, so the bees don’t sting him.

Even on the rare occasions where they do sting Nature, he says that it surely is his own fault and blames himself for the stings rather than the bees. He’s said that “without ‘any fault of mine, a bee would never sting me at all”.

Nature said his first experience with bees was when he put a queen bee on his hand, and within 15 minutes, working bees covered his hand to protect the queen. The next day, he tried the same trick but this time he put the queen on his head, and the same thing happened where his face was fully covered with bees crawling on his head.

According to Nature, his father Sajaykumar was the one who introduced him to the bees for the first time, as he himself is an award-winning honey maker and beekeeper. Nature also has a brother with a bee-themed name, called Nectar.

His father has advised Nature to regard bees as friends, and always be patient with them and never give in to the fear. He says that staying calm and listening to his father’s advice is the key to eliminating any nervousness when he has a head full of buzzing creatures.