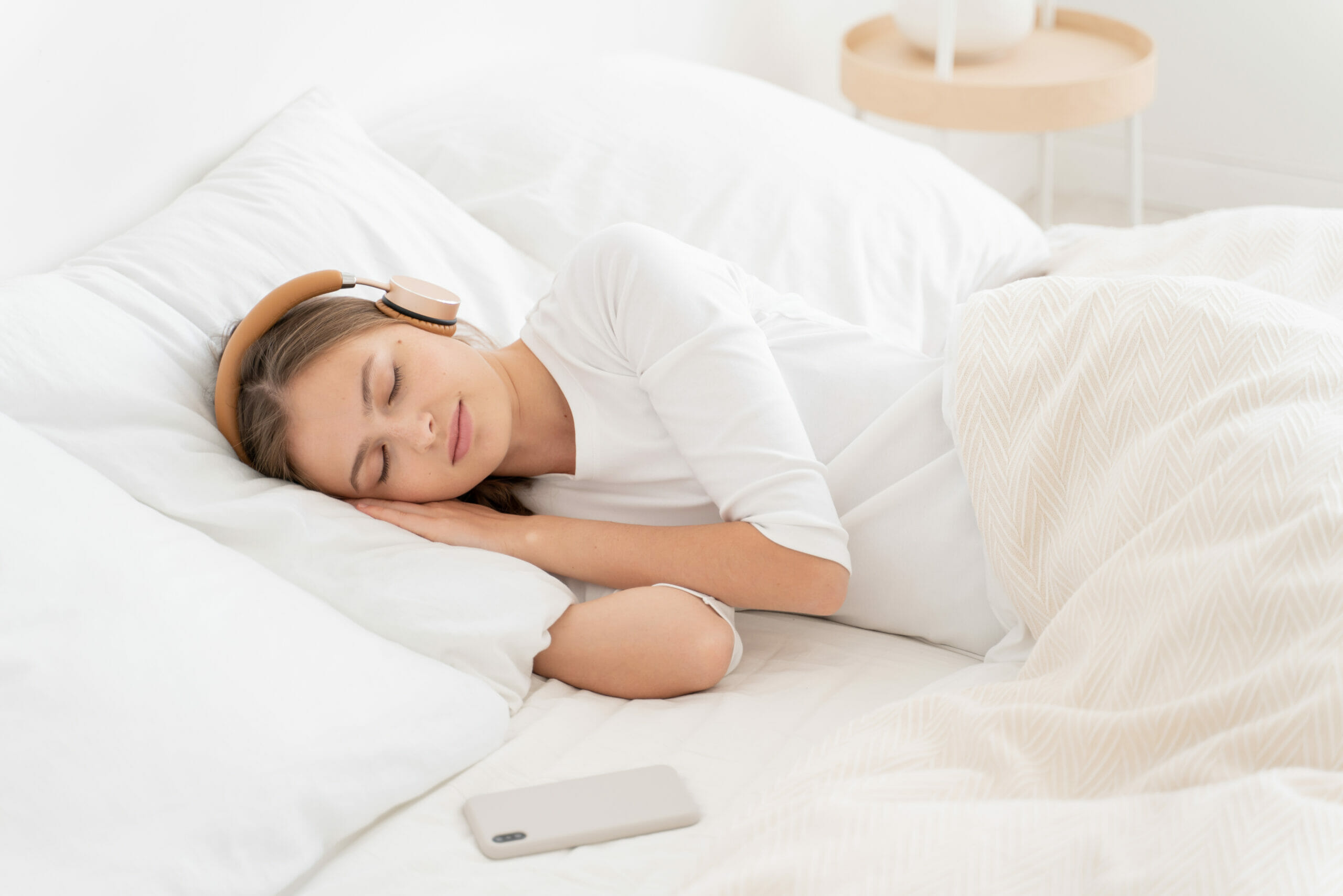 Many people find listening to something helps them to fall asleep. However, everyone has very individual preferences when it comes to what sounds help them wind down. Whilst some are fairly obvious choices, such as rainfall or crashing waves, others are a little more unique. ASMR has become a popular choice for people seeking a good night’s sleep, whilst other people find true crime podcasts to (somehow) be calming!

It’s no surprise that in this busy day and age, getting sleep isn’t so easy. With around 33% to 50% of the adult population in the US suffering from insomnia, finding a solution to getting to sleep is on a lot of peoples’ minds. One of the most effective ways, according to research, is to listen to music or other calming sounds. This is because background noise can act as a distraction from thoughts and helps drown out environmental noises that disturb sleep, such as traffic. These studies have also shown that adults who listen to something when they go to bed get better quality sleep than those who don’t. This is because certain sounds help lower the stress hormone cortisol and increase the release of the happiness hormone dopamine.

So, what are the most popular songs for sleep? According to a study conducted by hotel company Premier Inn, the top ten most frequent songs found in Spotify sleep playlists have between 80-130 beats per minute (BPM), which is close to the average resting heart rate of a normal individual, 60-100BPM.

The data revealed that ‘Someone You Loved’ by Lewis Capaldi was the most popular song to drift off to. Another popular choice was ‘All I Want’ by Kodaline, which had one of the slowest tempos, at a calming 86 BPM. Pop appeared to be the most soothing genre for sleeping, followed by K-pop, folk-pop, and pop-rock.

As for the artists ranked as the best for sleep, number one was Korean boyband, BTS. Others in the top ten were Billie Eilish, Harry Styles, XXXTENTACION, and Shawn Mendes

But what about the weirder choices for getting to sleep?

Falling asleep to music might be some peoples’ remedy for insomnia, but others find that music is not relaxing enough. ASMR has blown up over the past few years as its been proven to activate certain areas of the brain associated with self-awareness, social understanding, and social behaviors. Because ASMR activates the same parts of the brain that being social does, this means people experience feelings of comfort and relaxation.

According to the most popular ASMR sleep tracks on Spotify and YouTube, the best ASMR sounds for sleep are whispering, massage sounds, tapping, and stroking brushes.

Podcasts are another popular choice for those seeking a great night’s sleep. A 2019 survey from Edison Research found that more than half of the nearly 6,000 people surveyed in the US say that listening to podcasts is the way they relax before falling asleep. There’s a multitude of apps just for sleep podcasts, like the mindfulness app Calm and audiobook provider Audible, which have a huge selection of sleep stories and soundscapes.

One of the most popular genres of sleep podcasts is, surprisingly, true crime! For some people, listening to a murder case will release adrenaline, but for others, it acts psychologically like a fairy tale or a bedtime story. Focusing on the case and trying to fill in the blanks whilst it unfolds is a distracting activity, meaning people don’t dwell on their own thoughts, which helps them sleep. Others just find the narration style or the narrator’s tone soothing. Bizarrely, true crime podcasts can be a short-term solution to anxiety, according to one study on increased media consumption during the covid pandemic. The study also found that true crime podcasts can lead to positive emotions!

So, when it comes to picking the perfect soundtrack for sleep, you do you!

In this article:ASMR, life, sleep, Spotify