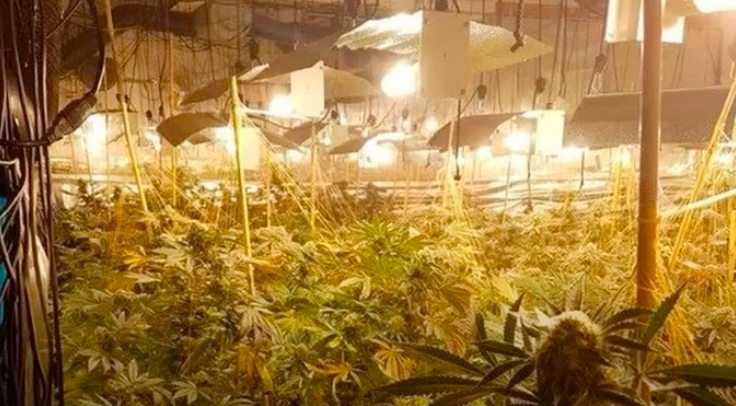 A huge cannabis farm worth £1 million ($1.3 million) uncovered at a former nightclub.

On Thursday, October 15th, officers from the National Crime Agency raided the property in Coventry on Trinity Street. They found over 1,000 plants on three floors.

Officers successfully apprehended two of the men with the help from drones.

Eventually, a total of three men where charged for producing a Class B drug.

Adam Warnock, NCA branch commander, has said this to be the largest farms uncovered.

“This is a significant drug seizure which will have a huge impact on the organized crime groups involved, depriving them of commodity and profit.

The size of the cannabis factory was significant and sophisticated, spread across three floors of a large building. It is certainly one of the largest grows ever uncovered by the NCA. Our investigation into this seizure continues.”

Until their next appearance in Warwick Crown Court on November 12, Albanian national Andi Qani, 24, and Cao Van Vu, 31, from Vietnam have only appeared before Coventry Magistrates Court on Friday

28 year old Albanian, Adrian Lieshaj, was the third suspect caught in this case.

Chief Superintendent Lee Wharmby, head of West Midlands Police’s Operations department had this to say about the farm:

“It’s always great when we can help out a partner agency. Our job is to protect the public and drones are invaluable to us.”

Monday 28 September, a van connected with a stolen Audi that was involved in a police pursuit. After arresting the 15 year old driver, the police They smelled cannabis coming from a building that was hit in the accident.

There were 50 plants found in the flats above.

“We are investigating after about 50 cannabis plants were discovered in a flat above a shop during checks for damage to buildings on Dogpool Road following the collision.

“We are investigating after about 50 cannabis plants were discovered in a flat above a shop during checks for damage to buildings on Dogpool Road following the collision.”