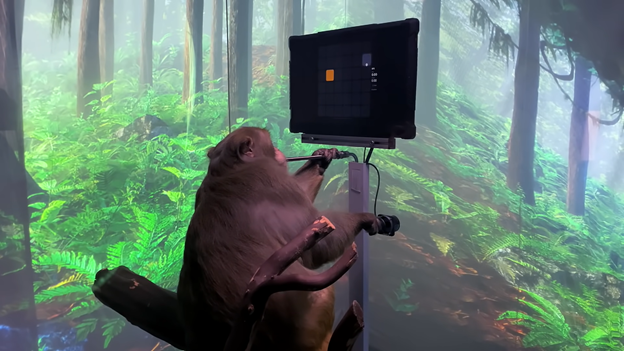 A macaque monkey named Pager played ping pong with its mind because of a Neuralink device that was implanted in its head. Pager was able to play this ping pong video game with himself due to the device telling the computer what neurons in his head were going off.

Neuralink, the company run by the one and only Elon Musk, is breaking barriers in the science/technology world. It sounds like Pager had a fun time because while he was playing he got to enjoy a banana smoothie as a treat/reward. This is being tested with the ‘goal’ in mind that someone with paralysis could work technology with their brain/mind. Check out the video of Pager playing ping pong below.

Wow, this is spectacular! This technology could literally change the lives of many for the better.

Elon Musk spoke on the topic when he was featured on the Good Time Show, explaining:

We’ve already got a monkey with a wireless implant in their skull, and the tiny wires, who can play video games using his mind.

He’s not uncomfortable, and he doesn’t look weird. And you can’t even see where the neural implant went in.

One of the things we’re trying to figure out is can we have the monkeys play mind ‘Pong’ with each other. That would be pretty cool.

Imagine two monkeys playing ping pong with just their minds – incredible! This definitely sounds like a forward-thinking topic for 2021.

What do you make of all of this? It is amazing to think it could help someone with paralysis communicate with technology with their mind alone! Musk hints that if all follows schedule, Neuralink could begin human trials sometime later this year!

If you found this article interesting, check out this one on an amazing team of scientists making history for paralysis patients.