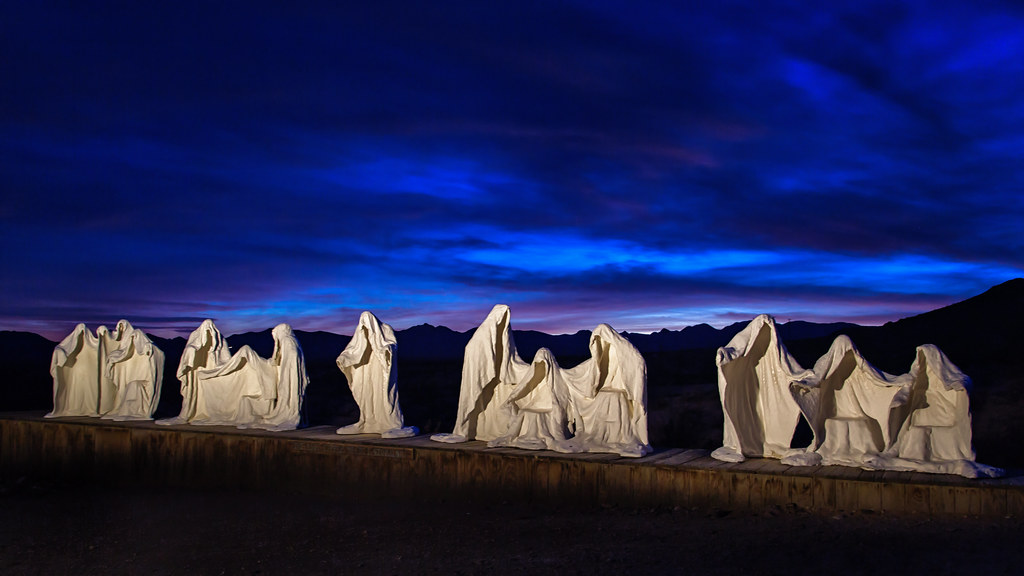 Since Google Street View was launched in 2007, the iconic camera-equipped cars have captured a whole host of interesting, unbelievable, and even down right scary images for the online world to see.

We have seen Pidgeon-masked people in Toyko, two guys cycling around with a dentist chair in Bangladesh, and a seagull trying to chase and hunt down the Street View car.

But hands down, the latest discovery by TikTok user Jason Cline may just be the most bizarre yet.

Cline stumbled across something that would appear something sinister was happening that that nobody was supposed to see when Google captured the ghost town of Rhyolite.

For the record I don’t do this…anymore 😅

In the video, the TikToker zooms in on the ghost town of Rhyolite, an abandoned mining town that closed due to financial ruin.

Cline hones in on the creepy figures of men in hooded cloaks, forming a circle and performing some kind of ceremony against the backdrop of the vast Nevada desert.

The meaning behind this? A ghostly haunting taking over the town at night? A weird secretive organisation’s ceremony? Just some guys fooling around next to the Google Street View camera? No, and it’s not what you would expect.

In fact, the scene is an installation by Belgian-Polish sculptor named Albert Szukalski called the ‘Last Supper’. It’s a modern twist on Leonardo da Vinci’s painting of Jesus’ Last Supper with his twelve disciples.

Each figure is merely a white cloak draped over a figure of nothing. The human bodies are missing, as well as the table and food also depicted in the original fresco.

Rhyolite, located in the Nevada desert, approximately 120 miles away from Las Vegas, was founded by two men, Short Harris and E. L. Cross, who were prospecting the area in 1904. They discovered the presence of quartz.

As a result, several camps were set up and the town was developed for the miners who needed proximity to the mines.

The Montgomery Shoshone mine was constructed to handle 300 tons of ore a day, and became iconic due to its founder claiming he could take $10,000 a day form the mine. Charles Schwab purchased it for $6 million in 1906.

Yet, there proved to be little bang for their buck, as a financial panic took a hold of the town in 1907. In 1908, investors of the Montgomery mine began to worry that it had been overvalued, which was confirmed by an independent study that plummeted the company’s stock value. As a result, the mines closed and the local business failed.

However, the remnants of Rhyolite’s short-lived boom remains, with some of the walls of the 3-story bank, part of the old jail, and even the trail depot.

Today, the ghost town attracts visitors as an open air museum, with Szukalski’s contribution being joined by other pieces on the landscape, including the ‘Ghost Rider’ and Desert Flower’.

There’s nothing more satisfying than a mystery solved. Except perhaps a Swiss Town getting snowed with chocolate after a mishap at the Lindt factory.