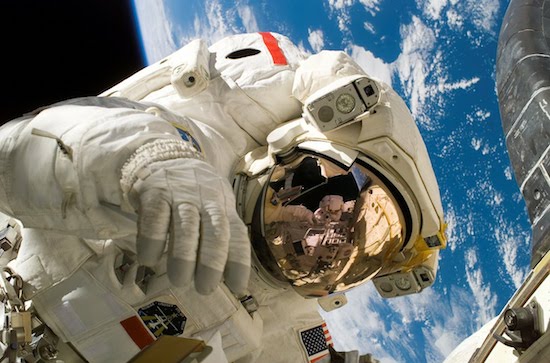 We would all be lying if we said we hadn’t at some point wondered what it must be like to be an astronaut. A lot of us probably wanted to grow up to be an astronaut…until we realised how much maths and physics stuff you need to know. Ew.

Footage has emerged which represents what it’s truly like being an astronaut. It’s one of those things we could all try very hard to picture, but would never really have any idea. The footage shows an astronaut performing some kind of maintenance one the outside of the rocket. You could compare that to just your ordinary maintenance work… building, electrician work, things like that. But I don’t think the view would quite compare.

Footage taken by NASA astronaut Peggy Whitson during a spacewalk. Now if that video doesn’t completely blow your mind, I don’t know what will. I had never even thought of the idea of there being cameras in space. I guess you would assume that astronauts are too busy doing important astronaut-related space stuff to be able to snap a video.

When watching the video, you feel like you’re a part of it. Floating all the way up there, looking down at the Earth. Think about all of the different things going on just in that one second that you’re looking, the amount of different events and conversations, the variety of which we can’t possibly comprehend. Crazy to think that Earth can even be viewed in such a way. That we can just remove ourselves from it and look down on. And then in the other direction is just blackness, we don’t know WTF is out there in the depths of space…it’s all pretty mind boggling if you ask me.