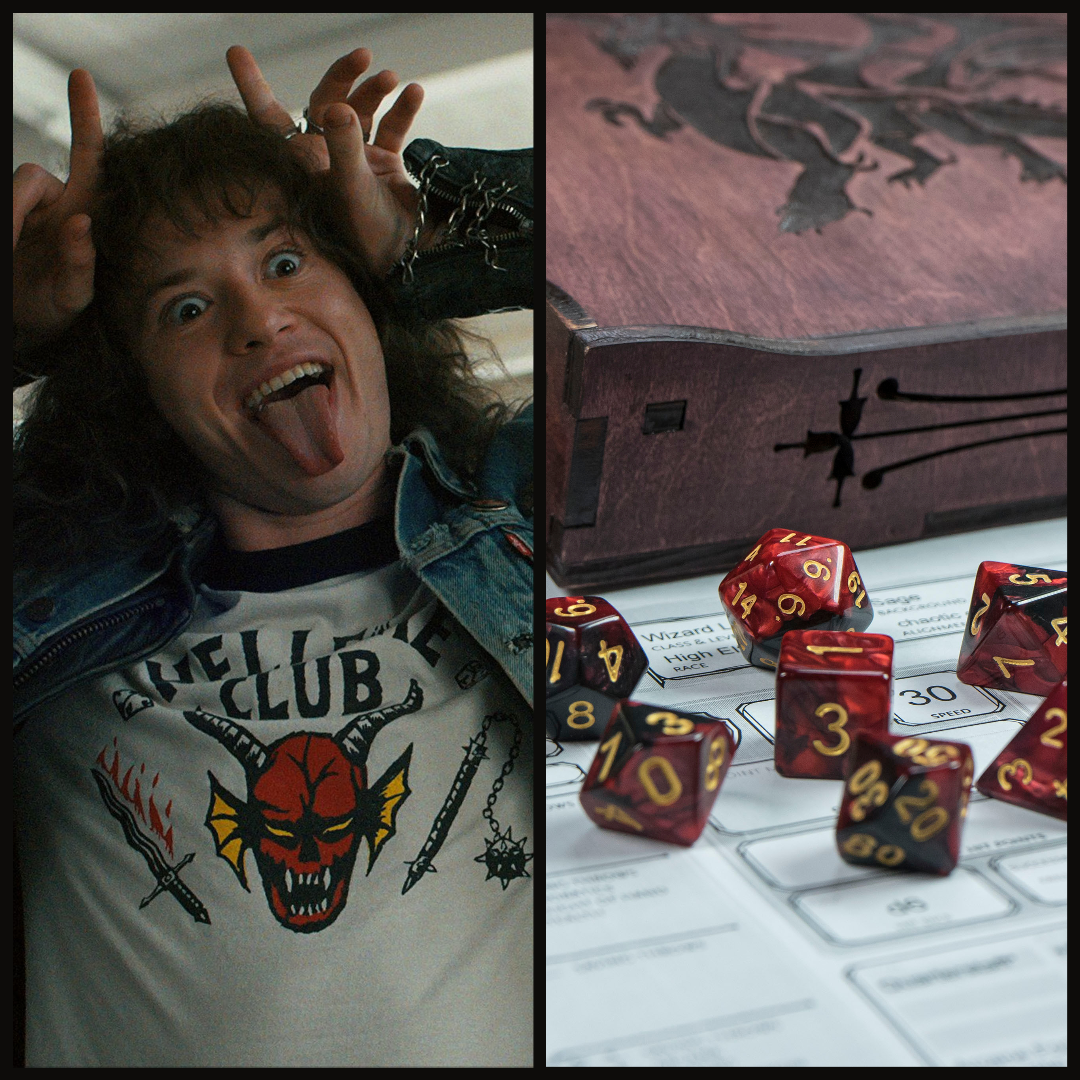 Stranger Things is back, and season 4 has brought a lot of horror, pop-culture references, and incredible music – all strung together by a little bit of history.

I know what you’re thinking – how can a show that centers around alternate realities and kids with psychokinetic abilities be in any way historically accurate?

Well, despite the science-fiction storyline and the fourth-wall breaks in the latest season, the creators of Stranger Things have always gone to great pains to portray an authentic 80s backdrop – big hair & shoulder pads alike.

Well, this season of the Netflix smash has introduced another facet of 80s cultural history – and no, it’s not the rising tensions of the Cold War (but that does make an appearance, don’t worry).

This time, we’re talking about the hysteria surrounding the crux of the show, the game that started it all, and that we must thank for the monsters such as the Demogorgon, the Mind-Flayer, and this season’s big bad Vecna – we’re talking about Dungeons and Dragons.

For those of the uninitiated, Dungeons and Dragons is a role-playing board game, and a cultural phenomenon. It’s a game where you use your imagination to create a fantastical character, and role-play as that character alongside some friends in order to progress the story, which is guided by the hands of the bountiful Dungeon Master.

Essentially, it’s a really nerdy game that is incredibly fun if you give it a chance.

Those who watch Stranger Things will know that Dungeons and Dragons is part of its core – the main characters start off by playing a campaign back in Season 1 right before Will Byers disappears.

The show also owes the namesakes for its many villains to the game – our boys like to relate the monsters to their D&D counterparts – hence how the infamous Demogorgon got its name.

The latest season of the show has brought D&D further into the spotlight, possibly more than ever before, by introducing a little bit of historical controversy: The Dungeons and Dragons panic of the 1980s.

You read that correctly – panic at the hands of a fantasy board game.

In the show, we see the rising moral panic that D&D has caused through the disdain for the new Hellfire Club, headed by everyone’s new favorite character – the metal head cinnamon roll that is Eddie ‘The Freak’ Munson.

Leaning into the controversy, Eddie likes to mess about and humor the other character’s perception of him as a satan-worshipping weirdo.

The truth though? He’s a really nice guy who likes a bit of metal and D&D with his friends, and he offers some pretty insightful comments on the true plague that is harming his fellow youths at this time – and yeah, it’s certainly not D&D.

It makes you wonder though; why did such an innocuous game cause such a culture war?

Well, it stems from 2 unfortunate suicides back in 1980, and 1982. When child prodigy James Egbert III went missing from University in 1979 and was later found after having self-harmed in his University’s tunnels, no one looked to his declining mental health and drug addiction as a source for his episodes of self-harm.

Then in 1980 when he fatally shot himself, the evidence of his above struggles was not enough to satiate those wanting a reason for his suicide – so they turned to the fantasy board game that he liked to play as the culprit: Dungeons and Dragons.

Then in 1982, another ‘Dungeons and Dragons suicide’ claimed another life, that of Lee Pulling. Despite indications of complex psychological factors leading to his suicide, his mother, Patricia Pulling, blamed the board game for his death.

After attempting to sue the school and the publishers of D&D (unsuccessfully), Pulling decided to campaign against the game by creating BADD (Bothered About Dungeons And Dragons) in 1983.

To be honest, I think the most awful thing I ever did in the game was steal from an NPC and successfully blame one of the other party members (being a rogue rocks), can’t say I remember ever turning to cannibalism or perversions.

A lot of fundamentalist groups believed that the game was an occult tool for summoning demons, and believed the game was cursed – even going so far as to claim that your character perishing in the game would lead to a real-life suicide.

The moral panic ravaged the nation, but of course in circumstances like this, the controversy only added to the popularity of the game, whose sales jumped from $2.8 to $8.7 million from 1979 to the culmination of the 80s.

Thankfully, most people associate the game with massive nerds rather than ritualistic killers, so at least we’ve overcome that social hurdle.

If only the next step was the game being considered cool. Maybe the universal love for season 4’s Eddie Munson will welcome in a new age of D&D love (along with the success of Critical Role!)

Read More: How Stranger Things Season 4 Has Caused a Resurgence in Popularity of Kate Bush’s 1985 Song ‘Running Up That Hill’