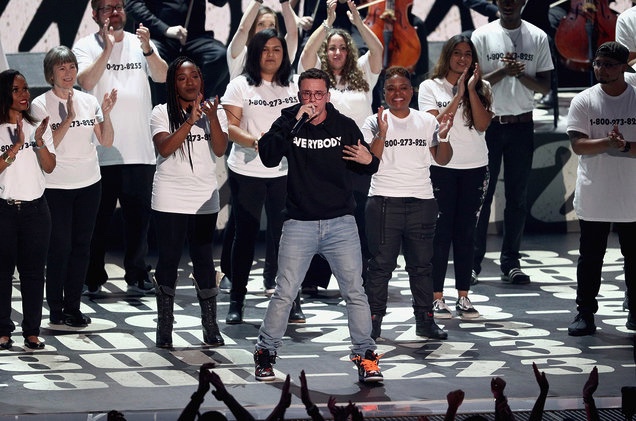 It seems that rapper Logic’s performance of “1-800-273-8255” at the MTV Video Music Awards 2017 was not only breathtaking performance but actually had a positive effect on people reaching out for help in the USA.

The song, which featured Khalid, Alessia Cara, and a choir on the night, revolves around topics such as suicide and depression and brings these topics into the limelight in a very creative and sensitive way. Have a look for yourself:

The day after this memorable performance, the National Suicide Prevention Lifeline Director of Communications Frances Gonzalez claimed that there had been a 50% surge in phone calls to the organisations hotline, and further to this, there was a 27% increase in calls to the hotline over the next three weeks. On the NSPL website, traffic also increased over the next few months, attracting seriously impressive numbers.

Here’s what Mr Gonzalez had to say: “Logic’s performance of ‘1-800-273-8255’ on the MTV VMAs last night delivered a positive message that has had, and will continue to have a lasting impact…Sharing that healing and hope are possible helps individuals in crisis, [and] as changes the conversation around suicide from one of isolation to one of hope and connection.”

The most important song I’ve ever wrote… pic.twitter.com/Lmfu9BnF31

More recently, at the 60th annual Grammy Awards, the musical trio took to the stage once again, to deliver their message boldly on camera and it seems they had the same impact. The number of phone calls post-performance tripled in the next two hours. Mr. Gonzalez, speaking to CNN, had this to say, “By sharing a message of hope and taking the stage with individuals who have been personally affected by suicide, Logic demonstrated on a global scale that healing is happening every day for people in crisis and that there is help available.”

This is a prime example of how music can effect people in a positive, yet slightly unconventional, way. Bravo Logic.

In this article:Entertainment, Mental Health, Music