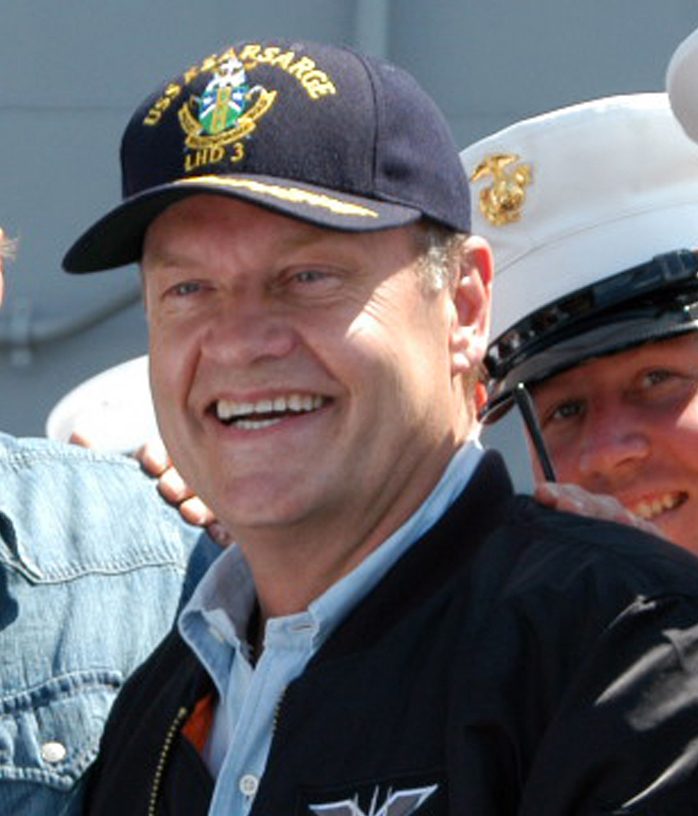 060524-N-7292N-139 New York Harbor (May 24, 2006) Ð Actors Hugh Jackman and Kelsey Grammer, are surrounded by Sailors on the flight deck aboard the amphibious assault ship USS Kearsarge (LHD 3), during opening day for Fleet week New York City 2006. Jackman plays Logan, AKA "Wolverine," and Grammer plays Dr. Hank McCoy, AKA ÒBeast,Ó in the upcoming 20th Century Fox action, sci-fi film "X-Men: The Last Stand." The actors gave the crew of Kearsarge a special sneak preview of the film before its worldwide release date of May 26, 2006. Fleet Week has been sponsored by New York City since 1984 in celebration of the United States sea service. The annual event also provides an opportunity for citizens of New York City and the surrounding Tri-State area to meet Sailors, and Marines, as well as witness first hand the latest capabilities of todayÕs Navy and Marine Corps team. Fleet week includes dozens of military demonstrations and displays, including public tours of many of the participating ships. U.S. Navy photo by Lithographer 3rd Class Christen R. Nicholas (RELEASED)

We might be hearing those blues come a-calling once again on our TV screens as comedy acting legend Kelsey Grammer announced that a Frasier reboot might be coming our way in 2020.

Grammer starred as the loveably pompous radio shrink Frasier Crane in all eleven seasons of the show from 1993 to 2004. The character first appeared in the beloved comedy Cheers before the highly successful spin off which follows Frasier’s exploits with love, his family and work life.

In an interview with Graham Bensinger, Kelsey revealed that the show was on course:

We’ve hatched the plan, what we think is the right way to go… [We’re] working out on a couple of possible network deals that we’re circling.

From this, it seems very likely that the show will be picked up. Which network wouldn’t? Until it was overtaken by Game of Thrones in 2016, the show held the record for the most Emmy Awards (37) ever won. It will be great to see the original cast members back for the mix of witty one liners and all out farce that the show did so well. On a sadder note, John Mahoney, who played Frasier’s father Martin passed away last year so it will be touching to see the show pay tribute to a man who helped make the show part of the ‘Golden Era’ of American comedy – alongside shows such as Friends, Seinfeld, Everybody Loves Raymond and The Fresh Prince of Bel-Air.

The show ended on an uplifting note with Frasier leaving Seattle to pursue love in Chicago. Kelsey stated that the show will still be about Frasier’s quest for love as well as building his relationship with his son – Frederick. However, the show won’t be set in Seattle so it will be interesting to see how it incorporates characters like Frasier’s brother Niles and his old radio producer Roz.

It is incredibly exciting to imagine the show returning helping to capture both old and new fans. The clamour for more tossed salad and scrambled eggs has clearly not subsided.

While your waiting for Frasier, why not watch some more classic American comedy?