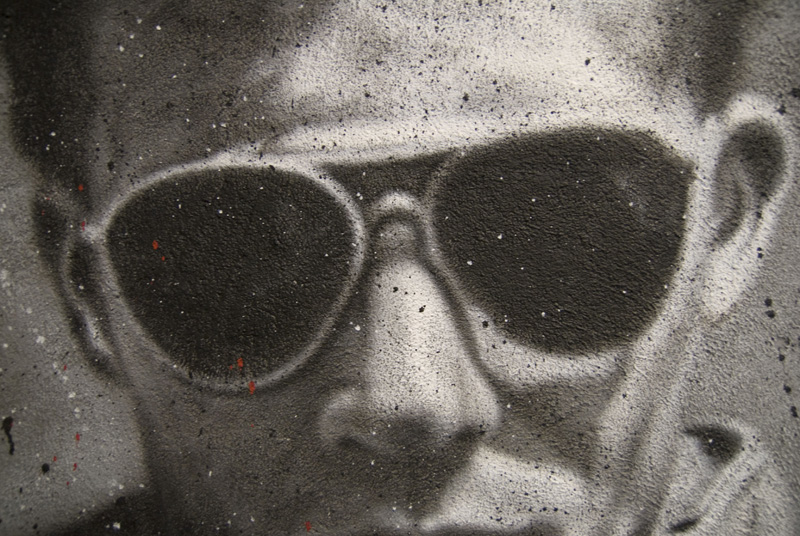 Hunter S. Thompson is an icon of the 1960s couterculture. He’s mainly known for his book Fear and Loathing in Las Vegas and his distinct brand of news reporting, Gonzo journalism. His articles mostly explore politics and sports with a smattering of his own drug-fueled misadventures. Curiously, he never wrote much about music, despite writing for Rolling Stone in its formative years and in a time when pop music held great political power. That’s what makes a letter of his describing his favorite albums of the ’60s so interesting.

The letter in question was written in December 11, 1970 and addressed to John Lombardo, his editor at Rolling Stone. It was later published in his correspondence collection Fear and Loathing in America (and made available online through Google Books!). Most of it touches on the magazine’s coverage of his involvement in Joe Edwards’s “Freak Power” campaign for mayor of Aspen, Colorado in 1969. It’s a story that he tells best, and you can find a sample on Rolling Stone‘s website here. In this letter, he just hashes out details for sending photos from the campaign. He also describes a recent conversation with Lombardo as his first since the election night defeat.

Then he rips into Lombardo for saying Thompson wasn’t big on music: “I resent your notion that Music is Not My Bag (or whatever you said …)” He mentions that he has “been arguing for years that music is the new Literature.” To the frustration of my English professors, the Nobel Prize committee would agree with this 46 years later. You can tell he was as passionate for rock as for politics because he threatens violence over it: “If the Grateful Dead came to town, I’d beat my way in with a fucking tire iron if necessary.”

Alright, I’ve kept you waiting long enough. Without further ado (except for that statement – and this one – and this), here’s Thompson’s list. The top ten albums of the 1960s, according to one of the writers who created its lasting image. Take this with a grain of salt, because in the letter he credits it to his alter ego, Raoul Duke:

Alright, I heard every single one of these albums in preparation for this article. Let me translate these listings:

So What Does It Say About Thompson?

Your musical taste does accurately tell me about you, including your politics.

Thompson’s list of the best ’60s albums looks totally different from lists that most modern listeners would make. Seriously, no Beatles? No Beach Boys? And what’s with all this jazz? What drugs was he on?

Okay, he was on a lot of drugs, but let’s think about what this list means. It was written at the end of 1970, and people at the time had a very different view of the decade’s music than we do now. For example, the reputation of Pet Sounds had yet to be vindicated by history. However, this means he had a clearer picture of the decade’s music than people mostly familiar with Vietnam War film soundtracks and Rolling Stone best-ever lists. Psychedelic rock and pop dominate our conceptions of the time, but jazz and folk dominate Thompson’s list because they were still major parts of the era.

I should also note that seemingly none of these albums heavily feature the studio wizardry that characterizes ’60s music for modern listeners. Even the most psychedelic of Thompson’s top ten feature rather traditional production and arrangements, without sound effects or distortion. Well, he does say about the Monkees, “I don’t have much stomach for studio-born road-shows.” Perhaps the idea of “fake bands” that relied on studio performers and technical flash just didn’t appeal to an iconoclast like Thompson.

One more thing: Thompson’s image is often seen as “savage.” The guy rode with Hells Angels and made enemies with his outspoken criticism of Nixon. Why would his top album, and certain others, consist of pleasant jazz and folk? Well, his writing is very stream-of-consciousness, often veering in unexpected directions. He even wrote to Lombardo in this very letter that he changed his mind halfway through writing a new article. Perhaps he saw some cross-medium kinship in freestyle jazz players. As for the folk? Thompson’s a very earthy man, or at least his writing gives that impression. I can only guess that he liked more politically conscious music with working-class themes and vibes, like Bob Dylan and Buffalo Springfield’s stuff. Plus, man’s gotta calm down sometime. Can’t party 24/7.

Geez, I’m alrady at more than 1200 words. That’s what I get for trying to ape Thompson’s style. I gotta admit, Music is Not Really My Bag either, but I’ll write about it any time if it means getting to pay tribute to one of my favorite writers and my inspiration for newswriting. Res ipsa loquitur.

Let the Good Times Roll with another article about Thompson. This one talks more about his drug consumption, and it’s rad.