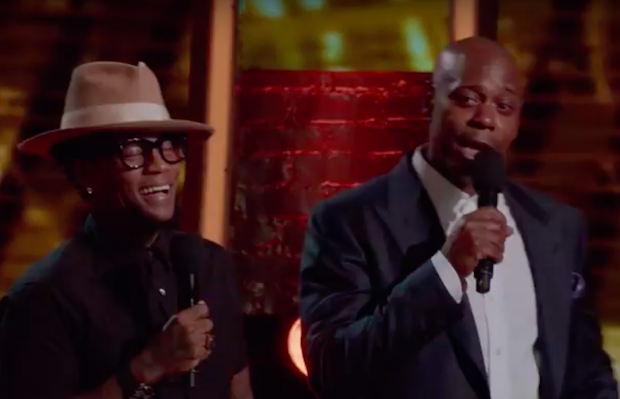 While recording an intro segment for the new Netflix Special “Def Comedy Jam 25,” Dave Chappelle and D.L. Hughley had a bit of an awkward moment when the music cue hit.

The segment started out lighthearted and scripted, mainly addressing comedy, but soon became a bit more real, turning to a more serious subject.

On script, Chappelle read, “What Def Comedy Jam was always willing to do was take the heat, the criticism and the hate. Because that’s basically just being black in America.”

The proceeding music cue was a little more upbeat than the comedian would have liked, so he called for them to take the line again.

“Wait, [executive producer] Stan [Lathan], let me do that again. That’s just a weird line. ‘That’s basically just being black in America.’” He then imitated the music that followed, which was indeed a little inappropriate for the preceding line. Chappelle then continued:

“If we told them what being black in America is, would they believe us? This is not for television. This is just for us in the room. I’ll ask again more succinctly, if we told them what it was, would they believe us? No, fuck no they wouldn’t. Nigga, there’s a fucking white supremacist starter kit at Target: ‘Here, let me get some tiki torches, some khaki pants and a fucked up haircut, I’ve got something going on next week.’ It’s real right now. And have we seen it all before? Yup.”

In the end, he concluded by taking the line again, requesting that DJ Kid Capri take a bit of a different approach to the music cue and telling the producer, “I’m fucking around Stan, I’m just busting your balls … You can leave this in, too. It’s a reunion, I was drinking backstage.”

You can watch the clip here:

Wanna watch more? Then, check this out! → WATCH: Video That Suggests We May Be Living In A Simulated Universe