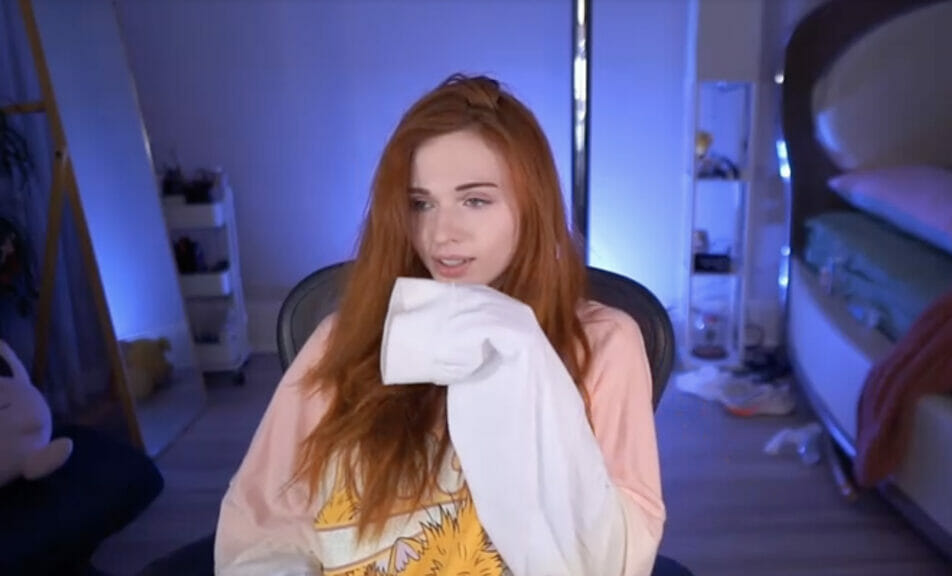 While Twitch is primarily known as a gaming streaming website, there are several different types of content on the website. ASMR streams, tub streams, sleeping streams, and more are also present on Twitch. One of the creators known for some of this content is Kaitlyn Siragusa, also known as ‘Amouranth’. Siragusa is known as one of the hardest-working creators on Twitch and has many followers on her OnlyFans. Yet, she trended on Twitter recently for admitting that she had a husband who had been abusive toward her. What happened to ‘Amouranth,’ and what does this mean for people who make content like hers online?

On October 16th, Siragusa went live on Twitch and revealed two hidden aspects of her personal life. Siragusa told viewers that she had a husband and that her husband had been abusive to her. Siragusa demonstrated the extent of her husband’s abuse through her stream and text messages she revealed on stream. Siragusa’s husband had been abusive through means such as forcing her to stream and not disclose their marriage (as it may hurt her career), threatening to kill her dogs, calling her a series of offensive names, taking away her money and giving it away, and deleting her social media accounts.

On this stream, Siragusa’s husband called her over the phone. At this moment, Siragusa’s husband yelled at her and threatened to destroy the career that she had built. Through this moment recorded live, many viewers witnessed the abuse that Siragusa had faced from her husband firsthand. It was incredibly alarming and chilled many to the bone.

Siragusa’s disclosure of her abuse was a divisive topic. Many people on the internet came to her support, hoping the creator was doing alright behind the cameras.

Yet, there was another strong response to the creator’s disclosure of her abuse situation — one that was much harsher and crueler. Many others online accused her of lying about the topic because she is a lucrative businesswoman. After posting a photo with her horse and announcing a stream the day after telling the world of her abuse, her tweet received negative comments such as the following:

Such a response from the online community begs the question: is this dismissal of ‘Amouranth’s’ abuse due to the sexual nature of her content? Furthermore, how may this reflect what occurs in the content-creating community that ‘Amouranth’ is a part of? How many other women have been pushed into their careers making this content? If they were to disclose it, would the public treat them seriously due to the nature of their content?

Siragusa Takes a Break from Streaming

Siragusa announced on Twitter that she would be take from streaming on October 19th. While the comments on this tweet once more showed the divisive response to this situation, most of the comments were incredibly supportive. They wished Siragusa a pleasant and relaxing break.

What can we learn from a situation like ‘Amouranth’s’? First of all, not everything is as it seems online. Second, women in the streaming world have a harder time than their male counterparts. This can be due to manipulation or a predominately male audience unwilling to listen to them when needed. Finally, women who work in content creation like ‘Amouranth’s’ may be taken less seriously by the public due to the sexual nature of their work. This should not be the case. No matter what, the public should listen to and help abuse survivors. One can only hope Siragusa makes a full and happy recovery from what she had experienced in her past relationship.