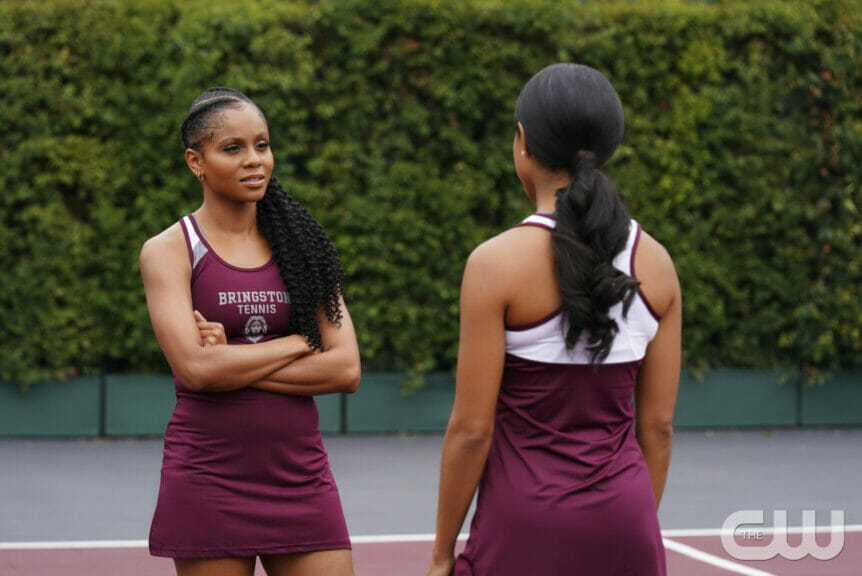 Welcome to Bringston University! All American: Homecoming season two is right around the corner! The highly anticipated sports drama series premieres on The CW Monday, Oct. 10 at 9 P.M. ET. Who will win the ego battle, Simone or Thea? Will Damon’s childhood scars make him or break him? Will Coach Marcus redeem himself? Tune in to find out!

All American: Homecoming is an excellent spinoff of the original All American series. Diversity matters. Its HBCU background plays a significant role in its success, as it has given African-American and Latino college athletes a voice. In addition, it honors the black LGBT community respectfully by giving them a voice.

For instance, Rhoyle Ivy King who stars as Nathaniel Hardin in the series is an African-American transgender woman navigating her way through life. Moreover, by featuring characters from the original series, All American: Homecoming has become one of the most highly anticipated sports dramas.

All fair in love and sports! Out of all the scandals and plot twists throughout season one, the love triangle between Simone, Jordan, and Damon was the cherry on top. In All American, the original series, Simone and Jordan attended Beverly Hills High School.

In season two, after being intimate, Jordan became infatuated with Simone, allowing her to trick him into believing he was the father of her unborn child. Throughout the season, Simone and Jordan develop a deep friendship, causing her to tell the truth about her child’s birth father.

Despite Simone’s behavior, Jordan confessed his love for her in the season finale. In season three, Simone and Jordan got married in Las Vegas. While Simone and Jordan were touring Bringston University, she met Damon.

After meeting Damon, it was evident that something in Simone changed, including her love for Jordan. Using life after high school as an excuse, Simone persuaded Jordan to get their marriage annulled later in the season.

In All American: Homecoming season one, including season four of the original series, it was apparent that the long-distance relationship between Simone and Jordan was doomed to fail.

Throughout the season, its safe to say that Simone was losing her love for Jordan and fighting her intense feelings for Damon. Meanwhile, Jordan falls in love with Layla, his twin sister’s best friend.

In the end, Simone breaks up with Jordan, leading him to confess his feelings for Layla surprisingly. Unfortunately, Damon’s heart wasn’t available thanks to Thea, causing Simone to feel bitter-sweet about her breakup with Jordan.

The ultimate battle that’ll occur in season two is Simone vs. Thea. Two two tennis stars both have a love for tennis and Damon, making them sworn enemies. At the beginning of season one, there was tension between Thea and Simone.

Wanting to be the leader and best player on the court caused them not to see eye to eye. However, towards the end of the season, they became close friends until Damon and Thea became a couple, which is one of the most shocking plot twists of the season.

Welcome To The Real World

All American: Homecoming is known for its jaw-dropping drama. However, the series has covered real-world problems that many people struggle with internally. Bringing awareness to issues individuals are too afraid or ashamed to speak about contributes to the series’ allure.

On the outside, Damon battles his opponents on the baseball field. But on the inside, he battles his childhood pain and emptiness regarding his biological parents. He eventually discovered his birth parents in the season finale, but his reaction wasn’t cheerful. He was pretty enraged.

Can you blame him? Imagine discovering that your teammate and best friend is your brother! In addition, Damon’s character in All American is prominent because individuals who are adopted and longing for their biological parents can relate to his internal battle concerning adoption.

At a party, Thea became intoxicated. Her date, Kevin, lured her from the party, forcing her to be intimate. Thanks to Damon, Thea was saved. Unfortunately, numerous women around the world ain’t fortunate enough to have someone prevent sexual assault from occurring. However, Thea’s experience can teach women in college to be more cautious while under the influence.

Beloved baseball coach, Coach Marcus’s battle with mental health must be highlighted. His outrageous outburst and behavior towards the end of the season is similar to individuals who ‘rant’ and post outrageous comments and posts on social media when they aren’t taking their medication.

Moreover, Coach Marcus’s mental breakdown enlightens viewers about the importance of mental health, such as making a commitment to take medication prescribed to them without feeling weak or ashamed.

Ready! Set! Hut! All American season 5 premieres Monday, Oct. 10 at 8 P.M. ET. Although its spinoff ranges from baseball to tennis, the original series focus solely on football. After season four’s last episode, it’s safe to say that tensions are high!

Will Spencer and Oliva’s relationship survive as Oliva’s journalist career takes off? Now that Simone and Jordan aren’t an item, will Jordan and Layla be the new ‘it couple’? Will Asher’s new position destroy his brotherhood with Spencer and Jordan?

In two weeks, we will discover how season 4 changed everything!

In this article:All American, All American Homecoming, Entertainment, The CW, TV & Film