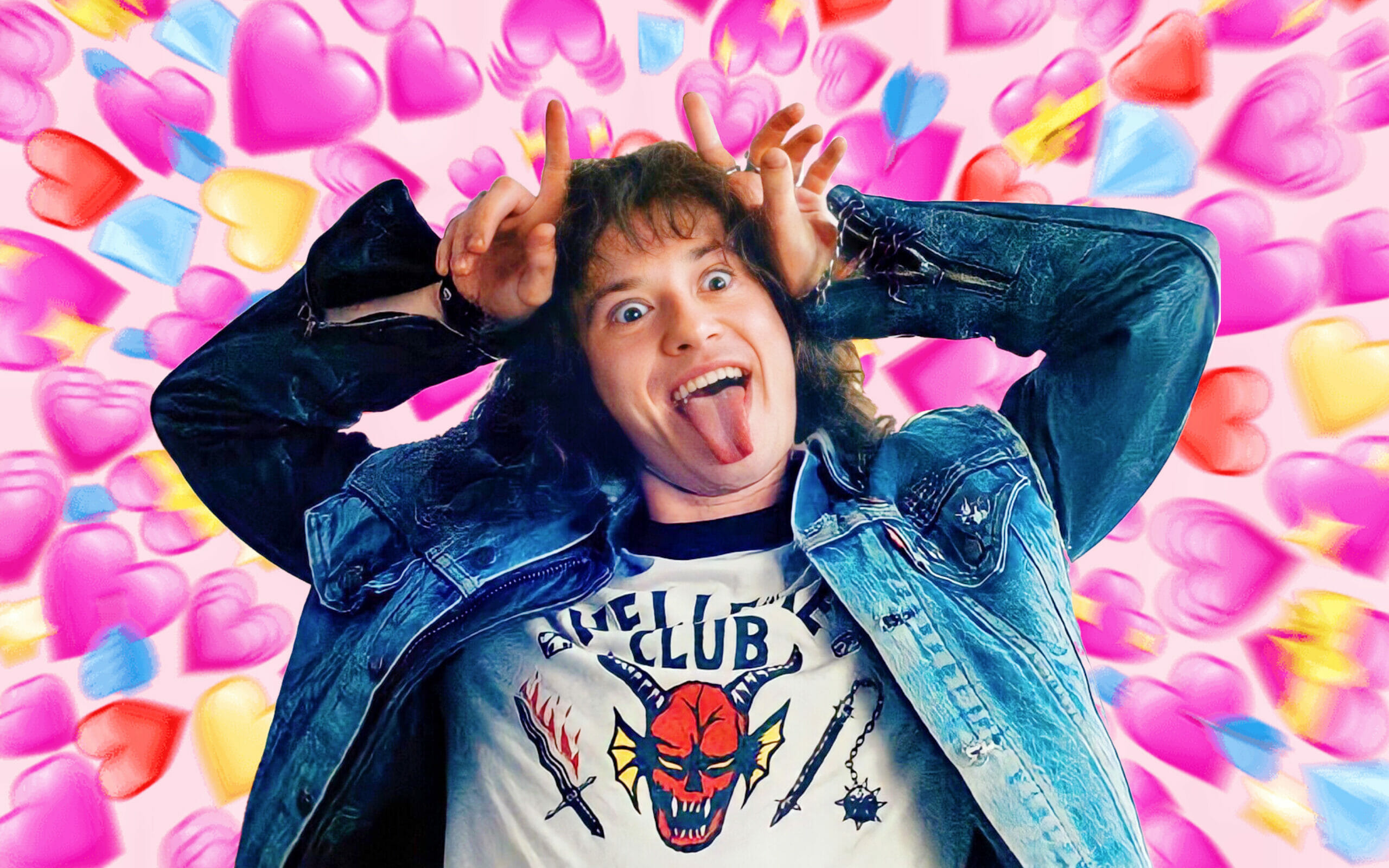 There’s this one clip — or person — I can’t get off my feed.

It’s a scene from Stranger Things. Eddie Munson yells and snaps as he begs a paralyzed Chrissy Cunningham to wake up. “Chrissy wake up! I don’t like this! Chrissy, wake up!” Yet, rather than terror, Munson’s voice is auto-tuned, mimicking the kind of goofy song you’d hear on a carousel.

Then there are the fan edits. Eddie tells his past to Chrissy while “Cry” by Cigarettes After Sex plays in the background. Different romantic clips flash after each other, transforming their meeting into an untold love story. If the edits aren’t about the couple, then they are about Munson — or better said, his actor Joseph Quinn.

There are the interviews: Quinn retells the time he got stopped by US immigration, while a giddy Jimmy Fallon bounces in laughter. In another, Quinn stops by Lollapalooza and plays “Master of Puppets” alongside Metallica.

In less than a month, Joseph Quinn transformed from an unknown actor to a breakout star. Today, you can find posts about him almost anywhere — especially on TikTok, where he’s garnered over 6 billion views.

So yeah, you could say the internet has a crush on him. This isn’t a strange phenomenon. The internet has had its fair share of boyfriends. Before Quinn there was Pete Davidson — and before Davidson, there was Timothee Chalamet, Adam Driver, and so forth.

The internet has drastically changed how we connect with celebrities. Now with platforms like Tumblr, Instagram, and Twitter, fans have greater power over their favorite’s reach.

How the internet picks its boyfriends is unique. Unlike old-school heartthrobs, the internet’s boyfriend often challenges conventions. He’s quirky, he’s different, he’s charming, but most importantly he redefines masculinity.

What is an internet boyfriend?

An internet boyfriend is someone who gets almost entirely good press. He may keep his life private, yet fans may know just enough about him to fantasize about their assumptions. Whatever glimpses we get are often endearing, like the time Keanu Reeves gave his seat to a woman, or the time Oscar Isaac ate a bag of Cheetos with chopsticks.

He or his characters may be flawed, but not detestable – think Adam Driver and his roster of emo characters, or Benedict Cumberbatch and his inability to pronounce the word “penguin.” He’s authentic; he’s relatable; he’s just like us.

He may not always be a classically handsome person. Benedict Cumberbatch never considered himself attractive — his fans have even compared his face to a badger’s. Then there’s Pete Davidson, who has often been teased for dating women “outside his league.” His allure baffles men, yet it is so evident to women. Why? Because he’s not threatening – his “plain” looks and authenticity make him feel safe and grounded.

According to Esther Zuckerman, the one who literally “wrote the book” on the topic, women and queer people are usually the ones selecting the internet’s boyfriend. This makes sense: in a network that enables things like sharing, storytelling, and whisper networks, writer Moira Egiel suggests the Internet has been more useful to women and marginalized groups than it has been to men. After all, men have always had easy access to other more streamlined types of communication, while women and queer people have often been confined to more rigid structures.

The idea that the internet can provide a refuge is nowhere near new, but that doesn’t make it any less potent. Sharing memes about our favorites or keeping up with their livestreams impacts us as much as a relationship. (How different is it from sending funny screenshots or stalking our crush’s Instagram?)

Now thanks to platforms like Twitter and Tumblr, fans get to fill in the gaps with their own desires. Fan fiction and internet boyfriends have displayed how important imagination is in female and queer fandoms. Imagination has been necessary as for a long time mainstream stories weren’t written by and for these audiences. Today, we’ve yet to understand the female or gay gaze; yet, their creativity keeps running wild.

As writer Sulagna Misra put it in a piece for The Cut:

“When real men disappoint us — in their politics, their bullshit, their basic human inconsistencies — the internet’s boyfriend is a paragon of enlightened masculinity.”

Being a “boyfriend” to the entire internet is a big responsibility – the celebrities that carry this title are icons of ideal masculinity in a post #metoo era. The internet’s boyfriend represents a turning point: bygone are the days when we worship macho men; today, we worship those who are comfortable in their skin, conscious men.

Yes, the internet’s boyfriend is partially built on fantasy – there’s no such thing as a “perfect” human being. But he offers a healthy example of what men can be (weird, vulnerable, etc.), rather than what they’ve been expected to be (strong, self-reliant, etc.).

Historically, fans’ role in shaping our culture has been reduced to a joke. But with their significant reach on social media, not only are they finally being heard, but they’re also shaping our role models. The internet’s boyfriend provides that example.

In this article:culture, Lifestyle, TV & Film