The most high-depth photo of the red planet yet.

According to NASA’s Mars Exploration Program: “NASA’s Curiosity rover captured its highest-resolution panorama yet of the Martian surface between Nov. 24 and Dec. 1, 2019. A version without the rover contains nearly 1.8 billion pixels; a version with the rover contains nearly 650 million pixels. Both versions are composed of more than 1,000 images that were carefully assembled over the following months.”

This incredible photo capturing the rocky surface of our red-rock neighbor took months for NASA scientists to compile, but the end results are simply amazing.

The photos are a reminder to the explorer in all of us, of why we are argonauts.

I highly recommend checking out NASA’s Mars Exploration page, where they have uploaded the full images with an interaction feature.

Curiosity was sent to Mars to determine if the planet could sustain life. Curiosity has 17 cameras and several tools to detect elements such as radiation, being emitted from the planet’s surface. Curiosity was launched on November 26, 2011 and reached the red planet on August 06 2012 – where it has remained for 687 days. 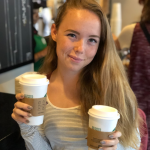