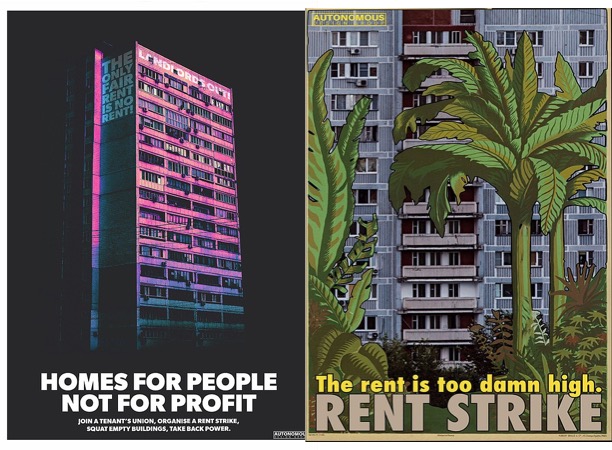 If you’re a history buff (or simply old enough to remember), the revolutionary artwork of the past has almost exclusively used a harsh red-and-black colour palette, reminiscent of Soviet-era propaganda. But Autonomous Design Group (ADG) approaches anti-capitalist sentiment with bright, eye-catching designs that are easy to understand.

ADG formed in the UK in 2019, and are a self-prescribed collective of creatives who produce artwork on modern-day issues. So far they have released pieces on the climate crisis, rent strikes, police reform and the advocation of higher pay for healthcare workers. Their digital art plays around with collage, typography and copy, creating unique pieces which can be infinitely shared online. However, ADG hopes to bring their artwork to the streets, in the hopes to reach a wider number of people – “a thousand posters are better than a thousand retweets” (ADG to VICE). The group also offer artistic support to social movements and political groups, as they understand the importance of aestheticism for gaining traction for a movement.

In an interview with VICE, ADG spoke about their work and the importance of political art in our current society.

When asked about their aims, ADG said: “We’d say the main aim of our design work is to aid social movements and put approachable and clear ideas into the street. We aren’t interested in producing art to be exhibited in galleries. Throughout history, radical art and ideas have been recuperated by capitalism, pacified and sold back to us as commodities. Indeed, capitalism ‘guarantees our passivity by selling us the image of revolt’.” For the collective, putting their art in the streets will revolutionise the way people think, altering the consciousness of the thousands of people who will witness their work.

Furthermore, when discussing the importance of using visual art to support social change ADG explained that “we’re faced with the choice between the continuation of capitalism or human extinction due to climate breakdown. We need to win, and extremely quickly. Part of this is winning the war of ideas. The vast majority of people, if you sat them down, and talked to them for hours, could be convinced of what we would call libertarian communist politics. But we just don’t have that luxury, we need to communicate our ideas within a matter of seconds.”

ADG has the intention to change the visual field, which has almost completely been seized by capitalism. As advertisement has taken control over visual art, from billboards to online marketing, it has transformed into what can be packaged and sold. For ADG “interrupting the visual domination of capitalism is essential in seeding its destruction.”

Despite a growing online presence, ADG still prioritises bringing their artwork and their messages to the streets. They believe that “in order to succeed it’s necessary to revolutionise all of society, not just a tiny number of people on Twitter.”

Previously, ADG has supported causes addressing housing, police funding and unions and explained that they are all symptoms of the hierarchy of capitalism. Although they will continue to support and produce work using these themes, they have a new project in the works. Inspired by the writings of the late David Graeber, about “bullshit jobs” and his idea that a 15-hour workweek is possible, the collective want people to realise that they can have autonomy and control over their own lives.

All of ADG’s designs are open source and editable, which you can find on their website here, or on their Instagram. ADG wants their work to be used, not as a product, but as a “tool for struggle which anyone can use.” So the next time you’re at a protest about climate change, or fancy putting up some anti-capitalist artwork in your windows for passersby to see, feel free to use ADG’s designs.