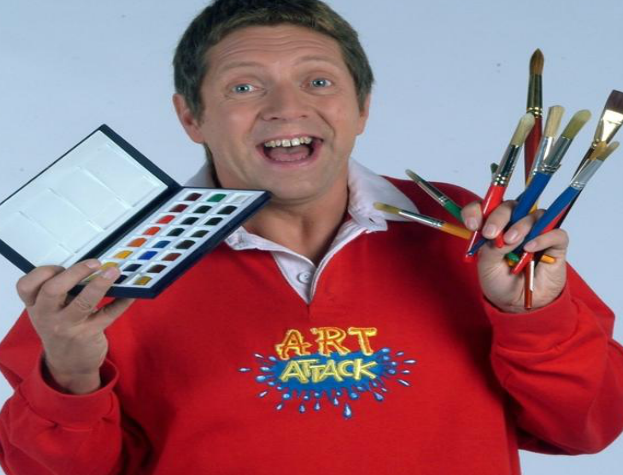 For those of you unaware, Buchanan is a widely known British icon. Hosting the show, “Art Attack” a largely popular show among British youth. Recently, word spread that he wasn’t just this iconic figure but that he doubled as Banksy, the prolific yet anonymous English artist.

In response to these rumors, Buchanan’s site made a post clearly titled, “Neil Buchanan is NOT Banksy” it adds that he has been in lockdown with his family and plans to release a new art collection soon.

This segment clearly aims to put to rest any lasting rumors. Whether or not people will choose to believe this is anyone’s guess.

Fans of Buchanan put forth their own theories, wondering whether it all may be one giant “Art Attack.”

With this rumor being laid to rest, the identity of Banksy remains shrouded in mystery. Although surely there are still fans who’ve stuck to their theories and believe this refusal to just be a ruse to throw off suspicion.

To be fair, isn’t there’s always the possibility that this is just what he wants us to think. No one hiding a double life would just come straight out after rumors begin to spread and announce they’ve been caught. The explanation featured on his site is little more than a paragraph denying the claims but isn’t that what anyone would do in attempt to keep their cover maintained to the public eye?

Well, in any case, the identity of Banksy is still very safe. Somewhere out there planning their next work of art in secrecy and anonymity. Surly as time goes on more and more people will face accusations but we’ll never know their identity for sure until they come out and tell us themselves.

The creator of these stencil creations is still operating in secrecy and there’s no sign they’ll make themselves known anytime soon. Until then though, Banksy remains little more than a stencil and a message.

Until Banksy decides to cast off the veil of secrecy, check out this article discussing a botched apartment listing by, Tirzah Alexander