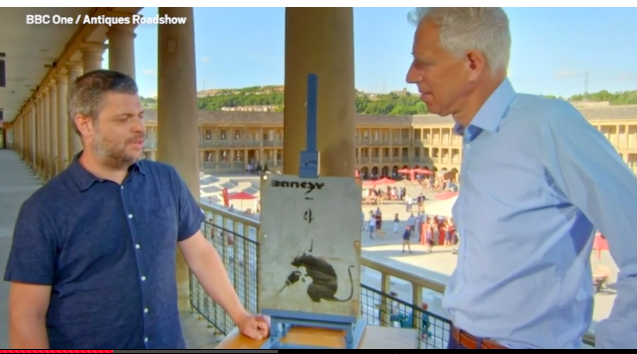 If you’re mom didn’t binge watch Antique Roadshow when you were growing up you didn’t have a childhood. I’m completely joking, but my mom did that’s for sure. In other news, a poor innocent man got schooled by art show expert after trying to resell a stolen ‘Banksy’ piece.

The story goes, the man was walking along a Brighton seafront when he saw the art hanging loosely off a wall. He went up to it, gave it a little wiggle, and off it went. He’s been holding onto it for quite some time before deciding to get a price point on it.

After appearing on Antique Roadshow the guest expert starts off with a series of standard questions before making some pretty pertinent claims. In the end straight up telling the poop guy that it could potentially be worth £20,000 if he could get it verified. But since Banksy has denied the verification certificate it’s not really worth anything

The worst part of this is the poor art owners face when he realized that this piece he’s been holding onto for years isn’t worth what he thought it’d to be. Not to say the art isn’t authentic, but without that stamp of approval, the art world could care less.

Should we take public art off of walls? Probably not. Do people do worse things for money than take a loose painting off a seafront? Most definitely. It just sucks that now this man’s face is trending on news sites for being the guy with the ‘stolen’ art.

Antique Roadshow has been in TV since 1979. You gotta think, there’s little that gets past these guys. Obviously the internet did it’s thing and you can find numerous tweets and threads either supporting or making fun of our inspiring art owner.