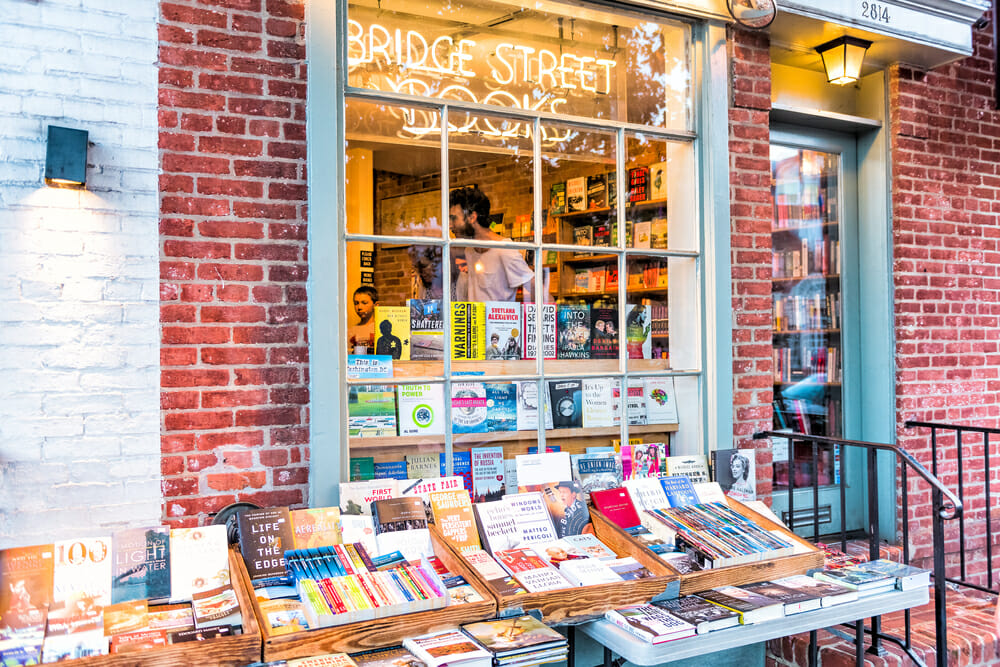 It’s nearly September. The record-breaking summer heat is finally drawing to a close. Evenings start becoming darker and leaves crunch underfoot. As the rain patters on your window, you curl up in bed with a good book. So peaceful, oblivious to the impact of that brown Amazon packaging tossed atop the recycling bin.

As an English Literature student, I’m prone to hurriedly logging onto Amazon Prime, praying that next-day delivery will save my degree once again. Ideally, I’d buy my books a little further in advance, perhaps from a more ethical company. Like all of us, I know, deep down, that ordering from Amazon will probably land me on Greta Thunberg’s naughty list.

So, I decided to do some research before the term starts. And, I think we could all benefit from what I found out. But, first of all, why is it so important to buy your books from ethically conscious websites and companies?

A typical paperback book has a climate impact similar to watching six hours of TV. This is around 1kg of carbon dioxide equivalent. The paper industry (which produces books) is pretty big on deforestation, which releases carbon dioxide, nitrogen oxides, sulfur dioxide, and other harmful greenhouse gases into the air. In addition, paper mills pollute surrounding surface waters by releasing alcohol and inorganic materials.

Where To Buy Your Books

We can’t alter how books are made, but we can change where we buy our books. The best solution? Choose to purchase second-hand books. But, if you need a new edition, ensure that the bookstore you visit has an ethical approach to their products’ production, packaging, and shipping. Don’t know where to shop? Here are the companies who’ll help you turn over a new page when buying books.

“As part of our commitment to environmental sustainability, we never, ever throw away a book’

In addition to their new additions, Better World Books offer a wide range of secondhand copies. Better World is an online store, so they’re conscious of the carbon emissions released during shipping. For this reason, if you pay a few extra pennies, you can select carbon-balanced shipping. This means that Better World will estimate the carbon impacts of the purchase. They then prevent an equivalent amount of carbon dioxide from being released into the atmosphere.

World of Books only sells secondhand books. If you’re worried about the environmental impact of producing new copies, then you’ll likely find the book you’re looking for in World of Books’ extensive catalogs. Not only does World of Books specialize in reselling, but they also recycle old products.

‘Last year, we recycled 61.7 million books – the equivalent to half a million trees – to be made into new products, working with specialist recycling partners.’

In their Social and Environmental Impact Report of 2019/20, World of Books states that they are developing a “road map” to ”achieve Net Zero by 2030”.

In their 2020/21 report, Oxfam claimed that they’d cut carbon emissions by 12% since 2019. They also aim to have a further 66% decrease by 2030. Although Oxfam does sell new copies, their focus is on secondhand goods, which lowers the overall carbon footprint. In addition, Oxfam ensures that at least 90% of the paper they use and sell is either recycled or FSC certified.

As well as their environmental policy, Oxfam’s report contains clauses on all six of the International Labour Organisation’s conventions. These include working hours, living wages, forced labor, child labor, freedom of association, and employment free from discrimination.

Swept Under The (Book) Covers

Although high street shops and online alternatives with speedy delivery are super convenient, they might be too good to be true.

Waterstones hasn’t yet released a report on its environmental policy, nor have they stated any ways in which they intend to cut down on future carbon emissions. They sell almost exclusively new copies, and no recycled paper products have been found in the notebooks sold by the company.

Unlike Waterstones, Google released an environmental report in 2020 which stated its aim to operate on carbon-free energy 24/7 by 2030. They also want to eliminate plastic from their packaging and make it 100% recyclable by 2030. So, what’s the problem? In an article by Greenpeace, it was noted that Google has contracts with companies such as Total, Shell, and Chevron. While Google is saying one thing, they’re doing another…

If this article were to have an antagonist, it would be Amazon: the big, evil baddy who’s annoyingly difficult to take down. Amazon’s main target: the book industry. The company actually started as an online bookseller. Although it has since expanded, Amazon has ownership of both AbeBooks and Audible.

You might notice that buying books on Amazon is much cheaper. This is because they sell thousands of other products, discounting their books and making up for this through sales of other products. Often, this makes it impossible for smaller publishers Amazon buys from to make any profit. And, with the current habits of shoppers, if your book isn’t sold on Amazon, it might not be sold at all.

With these low prices, Amazon is encouraging more consumption, leading to more shipping and carbon emissions. Until 2020, Amazon refused to disclose any report on these emissions. However, it’s been noted that Amazon only takes responsibility for products with an Amazon brand label… about 1% of sales.

Even with this factual inaccuracy, Amazon’s promise of getting to Net Zero by 2040 is doubtful; its carbon footprint increased by just over 36% from 2018 to 2020. And in 2020, Amazon’s carbon intensity (the amount of carbon emitted per dollar made) only improved by 3.9%. In fact, they calculated a shocking rate of 39 metric tons of carbon emissions per $1 million of revenue.

The hero that’s come to save the day: Bookshop.org. A direct competitor to Amazon, they promote local, independent bookshops. When these booksellers sign up to Bookshop, they can create their own virtual shopfront and receive a 30% cover price from each sale. 50% then goes to the publisher, 20% to website costs, and only 4% to Bookshop.

The website was created in 2020 and has since generated £2,343,029 in profits for independent UK bookshops, but go and check out their profit counter! In April 2022, they were given the B corp status, which means that Bookshop.org meets high social and environmental performance standards, transparency, and accountability.

All this research makes you never want to buy a book again. And with the wonders of modern technology, you don’t have to… at least not a physical book. E-readers avoid the environmental impacts of the paper industry; no deforestation, no water pollution – a perfect solution? In theory, yes, but in practice, maybe not.

In addition, e-readers are charged using electricity and have a much shorter lifetime than a paper book. And when they do die, they’re also tricky to recycle due to their chemical components. The novel ‘How Bad Are Bananas’ by Mike Berners-Lee estimates that the carbon footprint of an e-reader is about 36kh CO2e, and a book is around 1CO2e. So, if you’re a regular reader buying lots of books (over 36…) then an e-reader is probably worth it.

There’s no question that after all this research, I’m definitely going to re-think where I look for my books. With the influence of TikTok, where BookTok is expanding the reading community and popularising hundreds of novels, more people are buying books. It’s incredible to see… but the planet isn’t going to thank us if we don’t all reconsider the environmental impact of our purchases. So, next time you have to read the next Colleen Hoover novel, consider a second-hand copy, or even get yourself to a local library!