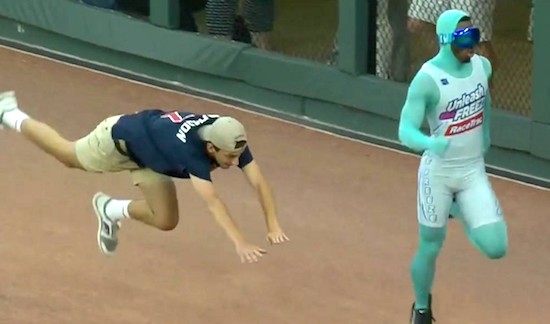 Think you could be the next Usain Bolt? Then Get yourself over to Atlanta to put yourself up against this guy, who completely outstripped his opponent in a race around a baseball pitch.

The match occurred as part of the ‘between innings’ entertainment at an Atlanta Braves vs New York Mets match, and features their unofficial mascot, ‘The Freeze’, an unidentified figure dressed from head to toe in green lycra. All seemed to be going well for the member of the public, who, given his 200-foot head start and proximity to the finish line, thought he had the race in the bag. Check out what happened below:

Remember the saying ‘pride comes before a fall’? Quite an embarrassment, no doubt a bruise to the ego and to the knees.

It’s a shame for The Freeze that the street races with $13,000 prizes don’t exist in the running world, or he could be making a pretty penny.

Make sure you keep up with the Atlanta Braves on Twitter.