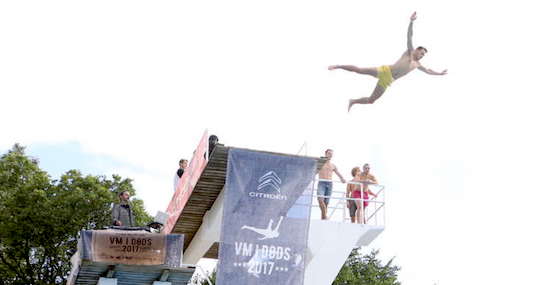 Diving is usually an elegant sport about graceful maneuvers and minimizing splash. Norwegian Death diving, or Dødsing, takes a completely different route. It’s less about aesthetics and more about being ballsy.

Death diving is about holding a spread-out position for as long as you can during the 10-meter drop before you hit the water. You need to curl up a little at the end to avoid injury, but you have to cut it close. The longer you stay flat, the more points you rack up. But because there are so many daredevils, you also need to rack up some style points if you want to be on top. That’s where flips, twists, and poses come in.

The sport supposedly began in the 1960s, at the Frognerbadet pool in Oslo, by some kids showing off on the 10 meter high dive.  It also has humble beginnings as an official sport, as its first championship had six divers and a dozen spectators. Ever since the founding of The International Dødsing Association in 2011, death diving’s popularity has spiked. It’s evolved into an extreme sport with yearly championships that attract thousands of spectators.

You can watch highlights from the most recent event here:

If you’re looking for more crazy diving, then you should watch this man dive from the fourth story into the pool.