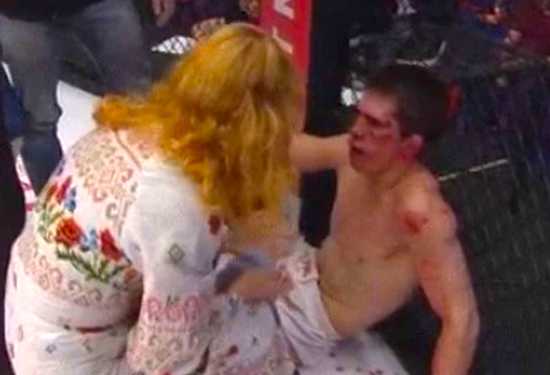 Crazy mother of MMA Fighter Victor Kichigan, 22, spotted slapping her son across the face. This followed on from him getting absolutely demolished in a fight, seemingly resulting in him deserving a slap.

You can’t help but wonder what helps to shape an MMA fighter. These guys are tough, strong and ruthless. You would probably assume that maybe they have some super-macho fathers who pushed them into fighting and encouraged their intense masculinity. But this woman definitely wears the trousers and obviously enforces her son’s fighting success…albeit slightly aggressively.

Jesus, that was a brutal beatdown at FNG. Grigoriy Kichigin got his ass kicked, and then his mom slapped the shit out of him afterwards. pic.twitter.com/TJgWyGKDx8

For more insane updates, read HERE about how psychaedlic mushrooms have now been dubbed the 'safest recreational drug'!