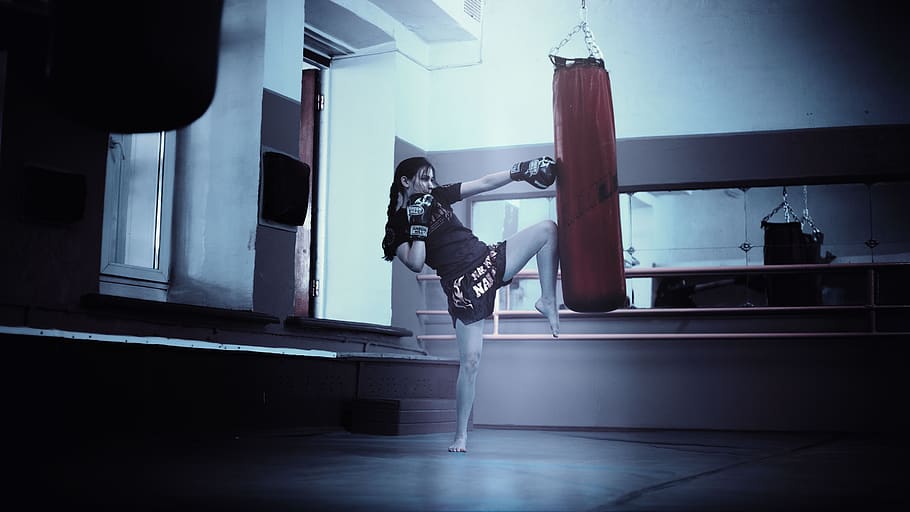 For centuries a male-dominated sport, the ring is now being shaken and shook up by these strong fearless women fighters claiming their rightful place.

Because of its sacred connotations, the Muay Thai ring has always been an area concerned with cleanliness and purity in Thailand. With the outdated superstitions of women’s menstruation, potentially “polluting” the ring, women have been forbidden from fighting in Muay Thai rings for centuries – let alone touch them.

However, in Lumpinee Boxing Stadium, opened for the first time in 1956, history was made last Saturday. The signs that surrounded the ring clearly stating, “Ladies please don’t touch the stage”, seemed entirely forgotten as the first two women fighters battled it out for a championship title.

The fighters were high schooler Nirawan Tangjew, only 17 years old, against 20-year old Tanawan Thongduang. Nirawan won, dominating the early action of the fight, securing the first two out of the five rotal rounds. Tanawan struggled to defend herself and strike back as Nirawan’s famed ‘teeps’ (also known as front-kicks) kept her at bay. In the final fifth round, viewers gasped as Nirawan dropped Tanawan to the ground with an unstoppable left kick. Thus, Nirawan took home the World Boxing Council mini flyweight belt in Muay Thai.

This historical event in the life of Lumpinee stirred up large amounts of interest and intrigue around the fighting and boxing venues in Thailand. Although, because of the COVID-19 pandemic, there was no in-person media coverage, audience,  and limited crew. However, the fight was still widespread and popular as viewers tapped in online to watch.

An outdoor stadium was built specifically for this event that had been postponed multiple times due to the pandemic – so anticipation and pressure was high.

After the win, Nirawan spoke to Vice World News claiming,

Tanawan instead opens up about her loss, failing to secure the title and the belt but still being proud to have partaken in this momentous occasion:

I’m a little sad not having won, but I’m so happy and proud to have been given the opportunity to be in the historical first female match in Lumpinee…It’s something I’ve never dreamed could happen to me. You know, when you go watch the matches there, they won’t even let females come near the stage. So to be able to be in that ring is such a huge honor for me.”

This fight has been a long time coming for these two women, who both started training at young ages. Nirawan since she was only 12 years old, coming from a family of professional boxers, started training at her father’s gym in the east of Thailand. The initial intention to teach his daughter how to fight was to help her stand up for herself against bullies. He’s said,

I originally wanted my daughter to box in order to stand up for herself against bullies…But she ended up actually really liking it, and she also had lots of potential as well as dedication. So we decided to enter her in an amateur fight.

Nirawan’s family dreams of her competing in the Olympics one day, eeping up her committed daily routine to the sport. Her father, Chamni Tangjew, fully believes in her getting to the Olympics since Muay Thai has recently been certified as an Olympic sport.

However, although this recent match was a historical success, there is still some friction in the Muay Thai world regarding turning the sport into a more inclusive and open space. Chamni reveals that when he began training Nirawan seriously, he received multiple accounts of backlash for letting a girl train.

Some people would ask me, “Why would you let your daughter fight? She’s going to get hurt.’ They were among the minority, though. There are no differences between men and women. Women can be anything – even a prime minister, a musician or any other career that a man can pursue.

Since joining, Nirawan has been alongside a growing number of aspiring women Muay Thai fighters. It is a difficult upward battle, but Nirawan and her competitor Tanawan have opened many people’s eyes to the inclusivity of the sport, and battling its real sexist and outdated traditions.

Certain rules are still held in place, keeping women and Muay Thai at bay. For instance, in many gyms, it is customary for women to crawl from underneath the bottom rope when entering the ring. Whereas men, pull down the top rope and hop over it to enter the ring. This was still done at Saturday’s fight, although it was two women competitors.

In the past, some people believed menstruation as something dirty and that bled into the Muay Thai industry. Over time, that belief became a custom and tradition.

The difficulty of facing these superstitions and dispelling them is the lack of support. Suwanna claims that no matter how stubborn and committed she may be, being a woman alone in front of a stadium full of men “Who would actually listen to me?”

Although public acceptance is growing, these pioneering women still want more equality in the reign of sports. In some stadiums, the rules on how women can enter the ring or whether they can fight at all are being lifted and forgotten. Lumpinee stadium’s lifting of the rules regarding no women fighting on it was historical exactly because of its previous sacred history. Hopefully, the fame of Lumpinee, firstly opened by the Royal Thai Army and quickly becoming one of the two most important Thai boxing arenas, abolishing its past superstitions against women and accepting them in the ring at last will encourage the rest of the Muay Thai gyms to follow suite.

Sport, and Muay Thai, was never made just for men. It is time to make space on the ring for all other identifying individuals as well. Sport, as we have seen with the recent Olympics, is a beautiful human engagement that should bring together and unite individuals instead of separate and segregate. This is the beginning of a long unravelling of history, and it is inspiring to watch women changing their futures, proving their strength both on and off the ring.

Read more about the inspiring advancements women are making in the world, bridging the gaps across all fields.