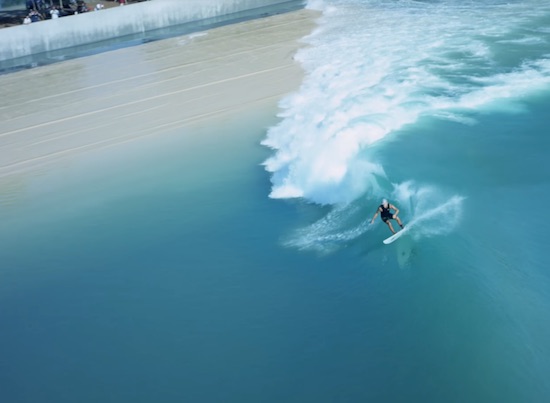 Kelly Slater’s become the Willy Wonka of surf. Every now and then somebody gets the golden ticket to visit his wave factory and the rest of us sit in wonder of what life is like inside those gates. The most recent guest of honor is a special one. Who better to gift KSWC’s first left to than possibly the most iconic goofy footer on the planet? “I really wanted Gerry to ride the first left and just say thanks for your commitments and what you’ve given to surfing over the years,” Slater says.

While Kelly’s wave pool doesn’t have the natural allure of the ocean, and takes away from the randomly miraculous moment of catching a swell in real time – the Surf Ranch 2.0 does provide a pretty sick artificial environment where riders can hone their skills and ride the perfect barrel over and over again – at least the riders that are lucky enough to be bros with the Willy Wonka of surf.

Kelly could’ve had any variety of young guns to come out and tear up the KSWC, but instead, he called upon someone who is considered a surfing pioneer; Mr. Pipeline himself, surf legend Gerry Lopez.

If it looks unreal, that’s because it is.

Gerry couldn’t help but to speak the truth after getting the first crack at Slater’s left.

Facilities such as the Surf Farm will be responsible for ushering in the new generations of surfers while also helping the world’s best out on days where the swell is subpar.

With artificial wave pool environments starting to pop up in various places, I wonder if maybe these wave factories will begin to expand and become a part of the commercial market in the U.S. and other countries. Most people don’t have access to exceptional private facilities such as Kelly’s, but maybe someone could take his Surf Farm format and run with it to initiate a surf practice facility-type business plan.

Take a look back to when Kelly’s Surf Farm was first conceived.