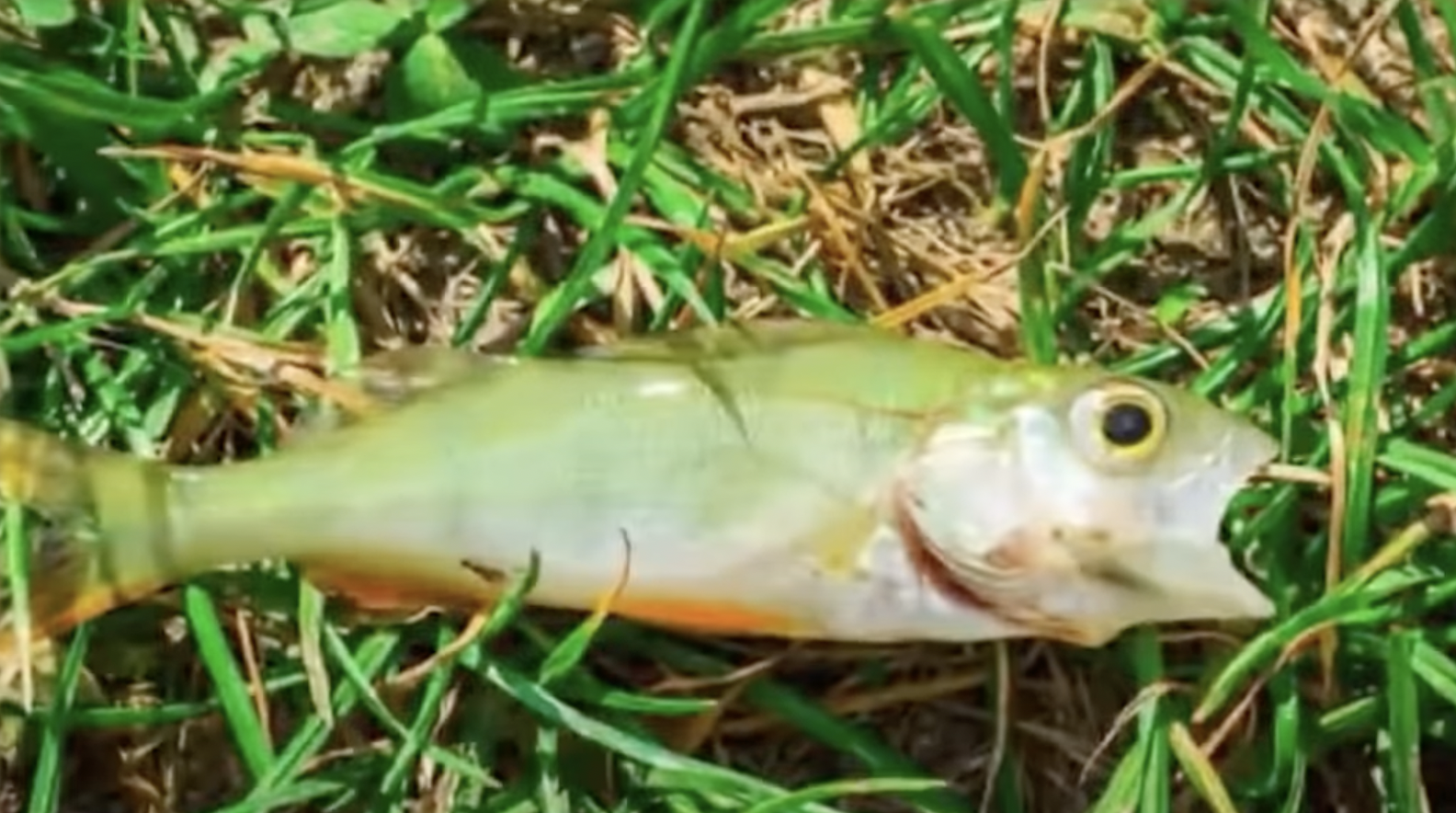 Just three short days before 2021 closed out, residents of Texarkana walked outside to find fish falling from the sky. Soon, the small bodies covered front lawns, streets, and roofs across the city.

The City of Texarkana took to Facebook to comment on the absurdity of the event, writing “2021 is pulling out all the tricks… including raining fish in Texarkana today. 🌧🐟 And no, this isn’t a joke.” Texarkana, Texas lies almost 200 miles east of Dallas on the border of Arkansas.

James Audirsch, in conversation with WCIA, reported that he was at work with his coworker Brad Pratt when they heard loud noises outside: “There was a loud crack of thunder, and when we opened up the bay door, I looked outside and it was raining real hard and a fish hit the ground.”

The fish were all relatively small, but some were as long as 4 or 5 inches from mouth to tail. They appeared to be juvenile white bass.

“Animal rain,” the City of Texarkana explained on Facebook, “is a phenomenon that occurs when small water animals like frogs, crabs, and small fish are swept up in waterspouts or drafts that occur on the surface of the earth. They are then rained down at the same time as the rain.”

This rare meteorological event has never been witnessed by scientists, so theories about how and why it occurs are speculative. One naturalist from the late 1800s proposed the existence of a species of walking catfish. These catfish, he suggested, migrate across land by traversing the distance between bodies of water. In essence, he suggested, by dragging their bodies from puddle to puddle.

Many consider the likeliest cause of animal rain to involve not the raining, or the falling of animals at all, but instead the propulsion of small bodies across land by wind.

The driving hypothesis, however, is the one referenced by the City of Texarkana, in which small tornado waterspouts pick up flightless creatures and carry them several kilometers into the sky and across land before dropping them with precipitation. The nearest lake to Texarkana, however, is almost 40 minutes away, leaving residents stunned.

During animal rain, only one species falls, rather than a group of similarly-sized animals within a small geographic area. Instead, either fish, frogs, or even spiders of a range of sizes (most small, though) fall. Scientists don’t know why only one type of animal falls, nor how any of their current theories would enable it. Some suggest the heavier objects––i.e. the larger animals––fall first, and the lighter objects fall last, which might explain why only one species is found per event.

This phenomenon has occurred several times throughout recorded history, with over 22 reported accounts of fish rain in the past two centuries. The event dates back to the first century AD, when Roman philosopher and author Pliny the Elder recorded storms of fish and frogs. A drawing from 1680 suggest that snakes fell along with rain during a “Renaissance Storm.” In 1861, it rained fish for three days in Singapore.

Other animals known to have fallen in animal rain include jellyfish in Bath, England in 1894, worms in Jennings, Louisiana in 2007, and octopuses, seashells, and starfish in Qingdao, China in 2018.

There have been reported cases of birds falling from the sky with rain as well, such as when approximately 1,000 blackbirds fell over a 1-mile span in Beebe, Arkansas in 2010. Unlike animal rain, falling birds often occurs due to the death or disorientation of birds already in flight, negating the presence of a weather phenomenon that lifts flightless organisms to an altitude from which they tumble with precipitation.

“While it’s uncommon, it happens, as evidenced in several places in Texarkana today,” the City of Texarkana finished off, “ So, show us your fishy pics! And please, for the sake of everyone, let’s tiptoe into 2022 as quietly as possible. 🤫”

Interested in learning more about the latest weather events? Click here to read about the tornadoes that struck Kentucky just a few weeks ago.