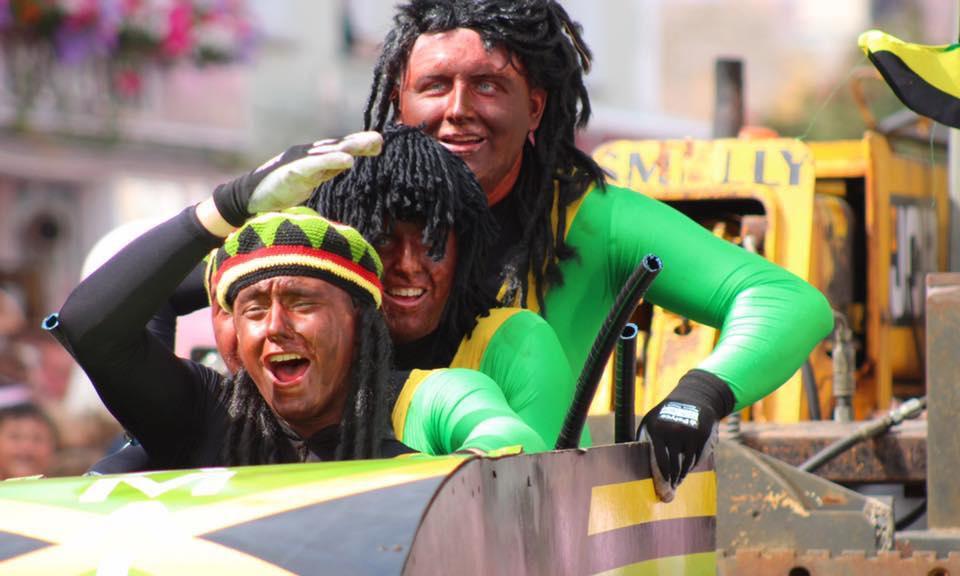 A small Wales town’s parade is drawing more attention than usual after a Cool Runnings tribute proved to be offensive. Local police announced they were investigating it as a possible “hate incident.” Paradegoers, politicians, and even members of the Jamaica Bobsleigh Federation are all commenting on the news. That’s because the float’s phony bobsledders were sporting blackface.

The crowd at the 2017 Abraeron Carnival parade cheered for a bulldozer draped in Jamaican flags, hoisting a faux bobsled. On the sled were four guys in bright green tracksuits and dreadlock wigs. One banner on the machine’s side quoted Disney’s sports film: “Feel the Rhythm! Feel the Rhyme! Get on up, it’s bobsled time!” Another referenced the real-life Jamaican team that inspired the film: “On Route to PyeongChang 2018 Winter Olympics.”

However, the blackface on the white participants soon gained the most attention. Jim James, who came from out of town for the carnival, told The Guardian, “I must admit we were a bit shocked. It might have been okay if they hadn’t blacked their faces … but to do that in this day and age can never be right.” A police spokesperson announced that someone reported it as a “hate incident.” Local officers were making inquiries at the moment.

The controversy even grabbed the attention of local politicians. Dinah Mulholland, who’s running in an upcoming election to represent Ceredigion County, denounced the float on Facebook. Her post called on Elizabeth Evans, a local councilor present at the carnival, to condemn it. As of this writing, Evans has not released a statement. 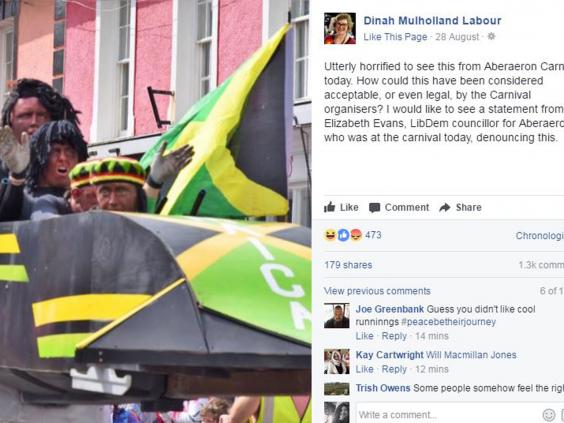 Response from the Jamaican Bobsleigh Federation

Word eventually reached the Jamaican Bobsleigh Federation, who released a statement on Facebook. According to their post, the people behind the racist float reached out to them and apologized for their insensitivity. As a show of good faith, they even donated to the federation. While others criticized the blackface offenders – and not without reason – representatives of the team reached an understanding with them. The post reads, “We like to take these opportunities to educate, rather than vilify. We believe there was no malice intended.”

Devon Harris, Secretary General and member of the famed 1988 Olympic team, went even further. In “trying to take a dispassionate approach,” he echoed the Federation’s view that the Welshmen meant no harm. He said, “We have to be wise enough to determine whether this particular incident was meant or done with bigotry and hatred in mind.”

However, one notable party in the story has yet to release any sort of statement. The Aberaeron Town Improvements Committee is in charge of setting up the parade. Their duties include reviewing and approving or dismissing applications for parade floats. In her Facebook post, Mulholland wrote, “How on Earth could this have been considered acceptable, or even legal, by the carnival organisers?” As of this writing, there’s still no answer. In fact, according to The Guardian, the committee “declined to comment.” In the rare moment when the eyes of the world fall on them and their town, they remain silent.

Here’s another story about people who got in trouble for body paint.