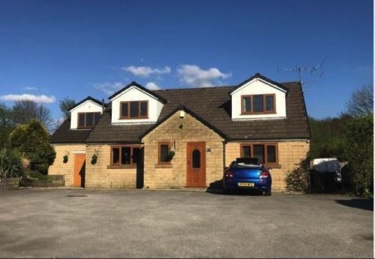 A Pissed Off Northerner Puts His House On The Market for £1 After Argument With Estate Agents.

Its well known that dealing with estate agents, putting your house on the market is one of the most time-consuming things out there. It takes months at a time and can be a heavy ordeal. Which is why you can’t help but feel for Chris Pollitt, who, after a disagreement with his estate agents, put his house on eBay of £1.

Pollitt is selling his beautiful 5 bedroom house, with a pool in Derbyshire on the online auction site because he was sick of his estate agent sending potential buyers along who had no real intention of buying.

Pollitt explains why he felt this course of action was necessary:

I’m just sick and tired of dealing with all the dickheads that my local estate agents are sending around. It seems like most of the people coming around have no intention of buying the place – one family bought some sandwiches and just sat in the pool eating them and catching some rays before leaving. I never heard from them again and most of the people they are sending around are exactly the same.

To make things worse, the estate agents were charging him extra fees, despite only having eight or nine views around the six months it was on the market, none of the buyers being serious anyway.

Pollitt wanted to prove that the extra fees are unnecessary by proving that he can sell the house himself on eBay, according to SickChirpse, he doesn’t even care how much he gets the house for, now, it’s more about the principle of the thing. He wants to prove that he can sell his house in 10 days, and looking at the biddings, he may be able to do just that.

On the day of writing, the house has gone up to £91,100,00, on eBay here! Showing that there is more genuine interest in just a handful of hours and days than the past six months it was on the market!

I have no idea if he’s going to pull it off and get what he originally desired for the house, however, he seems awfully close. I would even bid on it, it’s beautiful!

Are you guys interested in bidding on it? Give it a go here.

Image Via Know Your Meme

For more on real estate, check out this mogul who managed to snag a $5 million dollar mansion for a bargain.