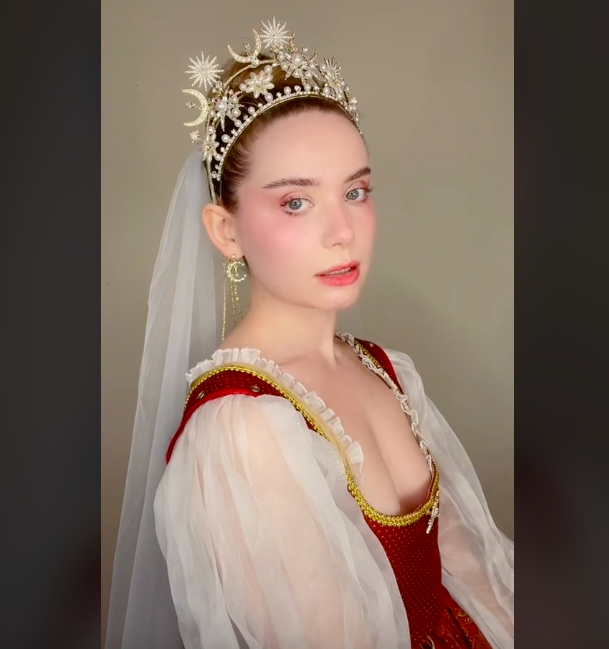 It’s quite an unprecedented time, right now, in that people can make money through various mediums – YouTube, TikTok – indulging in their passions and creating content related to the things they love.

We’re quite used to seeing YouTubers thrive and make bank by playing games or running beauty channels, and the D’Amelio sisters have shown what some decent dancing can get you over on TikTok.

My favorite thing to use TikTok and the like for, though, has to be the artistic expression through fashion.

Where can you find bomb outfits based on your favorite anime character? TikTok.

Where can you find adorable ensembles based on Sanrio character? Again, TikTok.

However, one TikToker, in particular, is taking this next level – she makes money on the platform by posting to her 1.7m strong audience TikToks of her dressed as…a fictional medieval Queen?

Why did I not know that this was an option?

Our Royal Highness is Queen Astraea – named for the Greek Goddess of justice, which we love – and she is taking over TikTok with sword and scepter in hand.

With flawless fashion and some hilarious lip-syncs, it’s no surprise that the New York native has had such a successful invasion on the platform.

Her outfits range from luxuriously ornate dresses to badass battle gear, and if the videos aren’t enough to showcase the brilliance of her niche, just take a look at some of the professional portraits over on her Instagram page.

Speaking to the Independent, the character of Astraea has rather humble beginnings as an imaginary friend; her elegance and power are fueled by various trips to the Museum of Natural History.

It was amongst the many portraits of strong and magnificent women that Queen Astraea was borne – which is very lucky for us peasants.

I wonder if the Queen needs another handmaiden; I’d be more than happy to join her court and partake in the frolicking of the gowns – anyone else?

Read More: What is a ‘Disney Adult’ and Why Do People Hate Them?