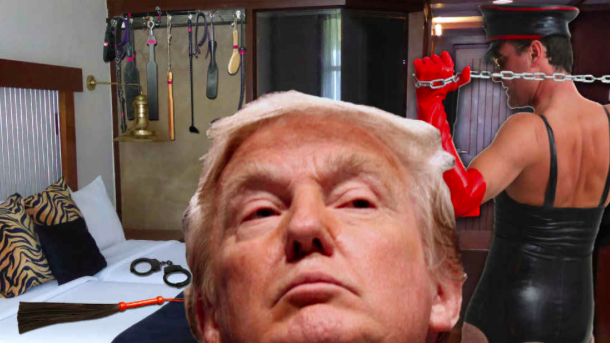 While this is certainly not the most newsworthy Trump-related story of the week, it has to be one of the strangest.

The story, titled Trump Temptations: The Billionaire and the Bellboy, was released by American comedian, rapper, and apparent author Elijah Daniel in 2016. Daniel gained notoriety last year when, after becoming mayor of Hell, Michigan, he banned heterosexuality in response to Trump’s Muslim ban. Daniel was promptly impeached from office for his bold statement.

Although Daniel is convinced that Trump or some member of his administration intervened to take the story off of Amazon, no official source has confirmed Trump’s involvement. Meanwhile, Amazon reports that the book has “Quality Issues” relating to formatting, which could also be an explanation for its removal.

Still, it’s not hard to see why Trump might want to see the story removed: Daniel’s work, as its title suggests, follows the (fictional) sexual exploits of Donald Trump and a young bellboy working at the Trump Hotel in Hong Kong. The story is only ten pages long, but it’s brimming with hilariously steamy scenes. Here’s just one of the many great quotes:

“My loins trembled as the scent of toupee adhesive and spray tan swept through my naval cavity… I had to admit, I wanted his geriatric 2006 Perez Hilton jello body…”

If that quote piqued your interest, fear not: the full text of Trump Temptations is available for free on Wattpad.

For slightly more mainstream Trump book-related news,  it looks like Michael Wolff’s Fire and Fury will be a TV series in the not-so-distant future!