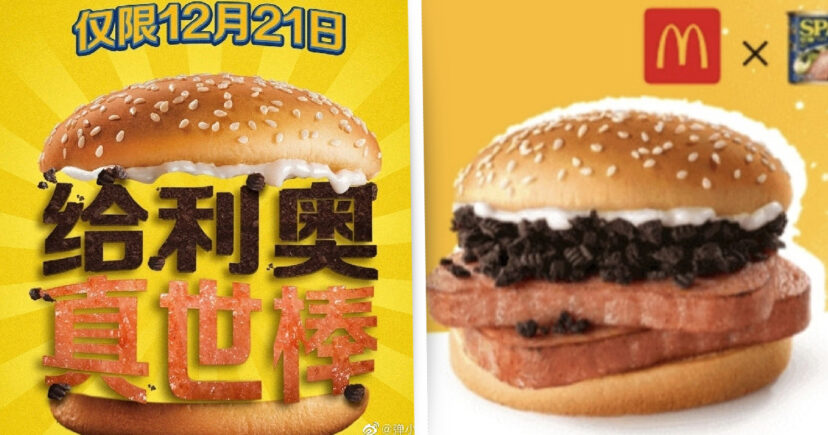 Who’d have thought that canned meat and chocolate cream cookies would be a perfect pairing?

McDonald’s isn’t afraid of releasing limited edition items on its menu – especially during the holiday seasons. Like at Easter, many of us look forward to seeing the creme egg McFlurry back on the menu. And American customers can once again feast on the holiday pie (like an apple pie, but filled with custard instead.)

Although chocolate eggs in ice cream is a far from unusual flavour combination, there has been a flurry of strange flavour combinations which have cropped up on fast food menus over the years. But, McDonald’s in China has certainly taken the biscuit (quite literally), with their new Oreo and Spam burger.

Now, when you think of tinned pork, your mind doesn’t automatically race towards chocolate biscuits with creme in the centre – but apparently whoever thought up the weird flavour combination does. News of this (thankfully) limited edition delicacy first reached Chinese blogging site Weibo. It was only a matter of time till it was brought to Twitter, which is thanks to gaming reported Daniel Ahmad.

He tweeted out a picture of the burger, and aptly wrote, ‘Look, I saw this so you have to see it too. Sorry, that’s how it works.’

It’s looks as weird as it sounds, as two chunky, fried pieces of Spam fill a burger bun, and are topped with a layer of crumbled Oreos. On top of the biscuits is some sort of mayonnaise sauce.

But some aren’t as quick to knock the dish. One twitter user wrote, ‘‘Hey, if there is a market for it, who am I to judge what people eat. It sounds utterly disgusting, but so does liver paté and it’s a big hit in Denmark. And don’t Americans dip their french fries in milkshakes, or am I just gullible AF?’

Another Twitter user even compared the limited edition item to the KFC sandwich which used glazed doughnuts as buns.

Whatever you opinion is, only 400,000 will be produced and sold and only in Chinese McDonald’s restaurants.

However, it’s not the strangest dish thats been cooked up in 2020 (although it is very much up there. Earlier in December, Twitter user @thatfrood shared images of a dish he’d dreamt about and needed to recreate. The dish named “King’s Hand”, consists of a Greek salad encased in and M&M cookie moulded into the shape of an arm.

So it seems that mixing Spam and Oreos isn’t the strangest dish to come out of 2020.