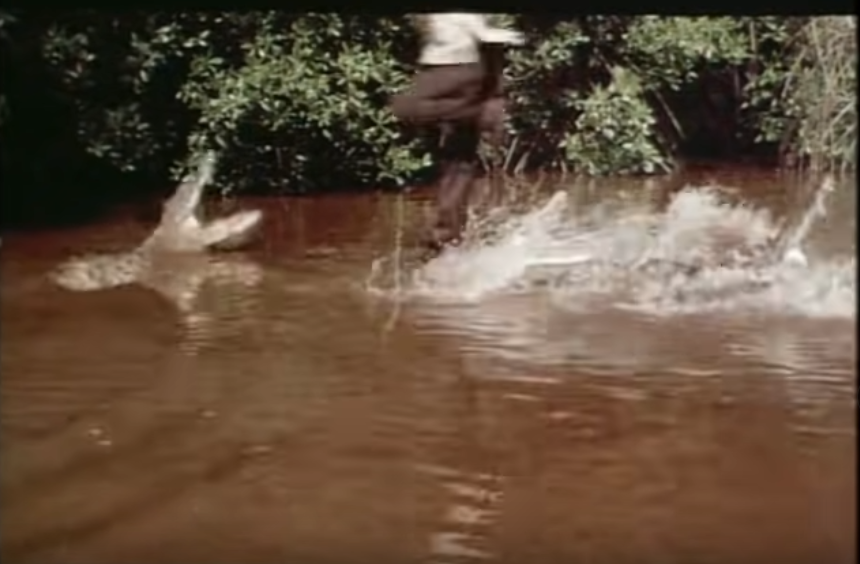 Sometimes, we need to take a step back and remember how things used to be. Movies premiered on TV networks like CBS, NBC, and ABC. Also, they didn’t take months in editing and special effects to finish so it could be released. And there were not as many stunt actors willing to do dangerous stunts like there were in later years and now with special effects. A lot has changed in filmmaking, clearly with the video of the man jumping over the crocodiles actually being real and the actor doing it himself!

It’s hard to believe that an actor could actually be convinced to do such a crazy, dangerous stunt. They also were paid a lot less money back then so that may be partially why. Although if you weren’t a big-name actor and were trying to come up in the business, then you do what you have to do. But running across three crocodiles? That’s going to be a no for me!

Behind The Scenes Footage Of The Stunt

Baron Samedi, the actor playing the bad guy in the movie, had only five chances to get that take. Only FIVE chances! That’s crazy. Live crocodiles and all too. One of them got ahold of his shoes and somehow the crocodile didn’t take a couple of his toes with it. As wild and as crazy as this stunt goes, it is pretty cool to see. However, I think a few more dollar signs at the end of his paycheck should probably have been negotiated.

Click here to watch the trailer for the new James Bond Movie.