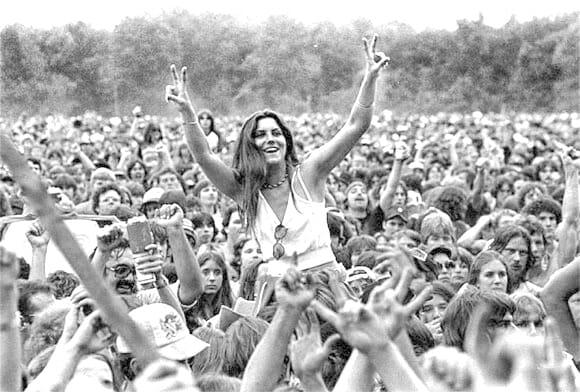 The year of 1969 was exceptional in American history. Apollo 11 was a success and Neil Armstrong set foot on the moon, Nixon announced the withdraw of 25,000 troops from Vietnam, and most importantly a generation of young people changed societal history.

Woodstock, the music festival, took place over the course of three days August 15th-18th of 1969. Though many may remember it as a weekend of peace, drugs and rock and roll, it became something much bigger— both physically and metaphorically. The estimated 50,000 attendees turned into over 400,000 leaving the organizers with little control over what would unfold the next 72 hours.

The original venue for the festival was in Woodstock, but because of projected ticket sales the permit was rejected. With just six weeks until the festival, a dairy farmer offered up some of his land to be used. Word spread of the outdoor festival and the organizers lost control of ticket sales once they realized they didn’t have enough time or money to set up fencing. Woodstock then became a free festival and people from all over the country traveled to be a part of the once in a lifetime experience.

The original venue for the festival

Most of the actual events occurring during the iconic festival have been forgotten in the decades past. In reality, there were overflowing toilets, a shortage of water, food laced with LSD, and a rain storm that turned the old dairy farm into a mud slide. Nearby neighbors and support groups passed out sandwiches once the vendors ran out of food by the second day. There were sanitation issues, extremely hot weather followed by a storm that flooded the festival. Yet none of this mattered to the campers. Woodstock was not just about the music, but the movement that followed and unknowingly became a defining moment in not only music, but American history.

1969 was in the heat of the era of hippies. The subculture surrounded love, peace, expressionism, and a strong resistance against the status quo. Most of society banned this new way of living and looked down upon the younger generation for being careless and irresponsible. Hippies were seen as ridiculous, which gave traction and fueled the agenda of the men in power. This lifestyle was arguably much more than drugs, sex, and music though as it became a counteraction to the political turmoil and U.S involvement in Vietnam that was happening at the time.

Woodstock became an opportunity for this new generation to interact with older folks and use the festival as a platform to be heard and communicate their beliefs. This subculture of hippies and young people was not only just about smoking weed and listening to music. It became a movement to start valuing a life rooted in peace and happiness rather than the harsh, serrated edges of politics and war. Whether or not people chose to listen was subjective, but the events and messages broadcasted over the course of the festival will forever be remembered in U.S history.

Woodstock, setting aside all the contention, was of course about the music. Artists such as Janis Joplin, The Who, and the Grateful Dead took the stage. Closing the festival, Jimi Hendrix played a two hour long set at 9:00 in the morning in front of a crowd that had dwindled down to a small group that stood at the foot of the stage. It was here he played his incredible rendition of the Star Spangled Banner that not only was iconic melodically, but became symbolic of the 1960’s themself.

As he took the stage in an eerie haze that Monday morning, the crowd stood in silence as he performed. Woodstock was coming to an end, most of the festival goers had already started for home, yet he played tribute to all of them and to himself. To the resistance, to the love, to the voices that cried out for help in a country that had been riddled with pain and fear. He wasn’t supposed to close the festival, but volunteered to out of choice. As he played the distorted notes of our country’s anthem in front of the remaining bodies, they looked up to him as soldiers of their own. Not in Vietnam, but for their own country that had become a war zone of its own.

Woodstock will forever be one of the defining events in U.S history. The people, the music, and the lack of planning is what made it as beautiful and as life changing as it was. The three days in which it took place began to pave a road for social expression and struggle against the controlling forces. These avenues are some that we still walk down today, and we can thank the love of music for that.

Must WATCH: Carlos Santana On LSD When He Performed At Woodstock Festival