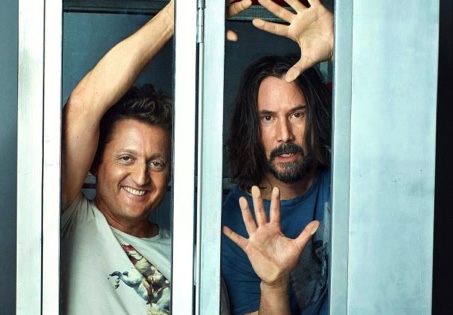 Keanu Reeves and Alex Winter are confirmed as starring in the long-awaited ‘Bill and Ted 3’.

After immense struggles with the script and legal problems, the film is finally in pre-production. Also known as ‘Bill and Ted Face the Music’ it features the namesakes as middle age dads, set 27 years after the last instalment. Furthermore, the new movie involves the daughters of Bill and Ted. “Bill has a daughter named Thea, Ted’s daughter is named Billie”, says writer Ed Solomon.

Are you excited about the latest Bill and Ted adventure?

The overall plot shows the main characters being faced with writing the greatest song in the world. Somebody from the future (naturally) tells them that it needs to happen now. Seeing as they must do it, the two decide to go to the future to steal it from themselves. Although this instalment does feature elements of the previous films, Solomon is keen to show it is not a rehash. This way, it can be aimed at those who haven’t seen the other movies as well as fans of the franchise.

MGM who own ‘Bill and Ted’, were all set to do a reboot of the original a few years ago. That never came to fruition and here we are with the sequel coming soon. Dean Parisot of Galaxy Quest is set to direct. If you’re worried that it is going to be CG like the biggest blockbusters, do not fret. Ed Solomon has assured that the film is independent “in budget and in spirit”, following the footsteps of the previous films.

Speaking of CG, What’s Next for the Marvel Cinematic Universe? Check it out here!