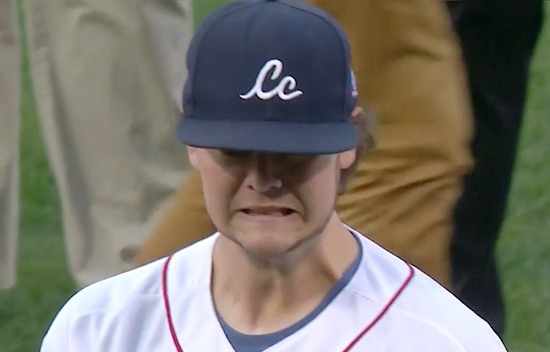 When camera man Tony Capobianco turned up for work at a Red Sox Baseball game this week, he was perhaps unaware of the discomfort he would soon be in at the hands of Jordan Leandre.

The ceremonial first pitch in a baseball game is exactly what it sounds like, with an elected person throwing the first ball of the game. The tradition dates back to 1890, and up until Trump, every US president since W.H. Taft in 1910 has participated.

However, the elected person does not have to be a president, and it was such that Jordan Leandre took to the pitch this Wednesday to throw the first pitch. Things did not go to plan, as you can see here:

When asked about the matter, Leandre said: “So as soon as I lifted my leg, I was still kind of in between throwing it hard or lobbing it in there. And it slipped out of my hand, and as soon as I saw where it was going, in my mind just went uh oh”.

Leandre, who suffered from the extremely rare cancer, Ewing’s sarcoma, has thrown at Fenway Park, Boston, five times before, including at the young age of four. What is perhaps most worrying about the event is that Leandre now pitches for his High School team.

The unfortunate soul at the receiving end of Leandre’s throw was camera man Tony Capobianco, who managed to capture photographic evidence of his impending doom.

Thankfully, Capobianco has subsequently tweeted that he is okay, and that the ball “was just a bit outside”.

What is almost as funny as the incident was the reaction of the 1967 “Red Sox Dream Team”, who watched the incident take place, and looked horrified.

MUST WATCH! HILARIOUS!
Here’s a great look at the 1967 #RedSox players reaction after Jordan Leandre hit @TonyCapobianco in groin.#wbz pic.twitter.com/oPmbHZ7jtU

To watch a more bizarre baseball tradition, check out a fan face plant in a race against “The Freeze”.