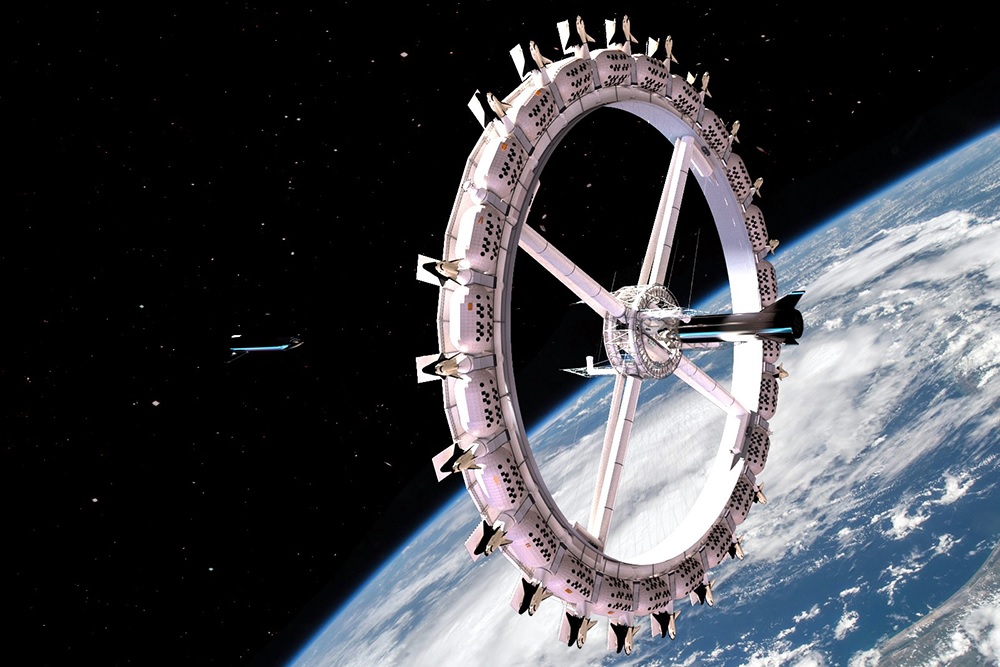 As our planet slowly inches towards its own destruction day by day, it follows that human expansion will have to expand beyond Earth’s boundaries. Naturally, it’s good old capitalism that has the solution for its manufactured problems, extending its reach to outer space, as the world’s first space hotel is set to open by 2027.

The Voyager Class Space station will be the first of its kind in space settlement, able to accommodate 400 people. In addition to hotel rooms, the station will include its own bars, cinema, restaurants, and spa. All the amenities you need to let you sit back and enjoy the view of your rapidly declining home planet.

According to the Orbital Assembly Corporation (OAC), the company building the Voyager, construction will begin in 2025 with the intention of its being operational by 2027. The OAC has the ambitious aim of colonising our solar system, with its new space station bringing them one step closer to achieving that mission.

The station is a “rotating space station designed to produce varying levels of artificial gravity by increasing or decreasing the rate of rotation.” Its design is intended to “accommodate both national space agencies conducting low gravity research and space tourists who want to experience life on a large space station with the comfort of low gravity and the feel of a nice hotel,” according to the Gateway Foundation’s website.

The Voyager Station consists of two concentric structural rings fixed together with a set of spokes, which support a Habitation Ring made up of large modules. The inner and outer rings have different functions: the inner one will act as a Docking Hub, while the outer ring truss features an Access Tube allowing people to move around the station freely. This truss will provide mounting for habitable modules, solar panels, radiators, and a rail transport system.

Below the Outer Ring Truss will be the Habitation Ring, “a series of large, connected, pressurized modules” that have various purposes, like a crew quarters module, governmental owned modules for scientific research, and even privately owned modules for villas, hotels, or commercial activity.

The Gateway Foundation writes that the Voyager Class is “one of the most important projects” in creating the world’s first spaceport, and “will likely be the first commercial space construction project in history.” Seems like we all have an exciting future ahead of us, minus the ongoing pandemic and environmental degradation.

For more space news, click here to read about all commercial flights to space in 2021.