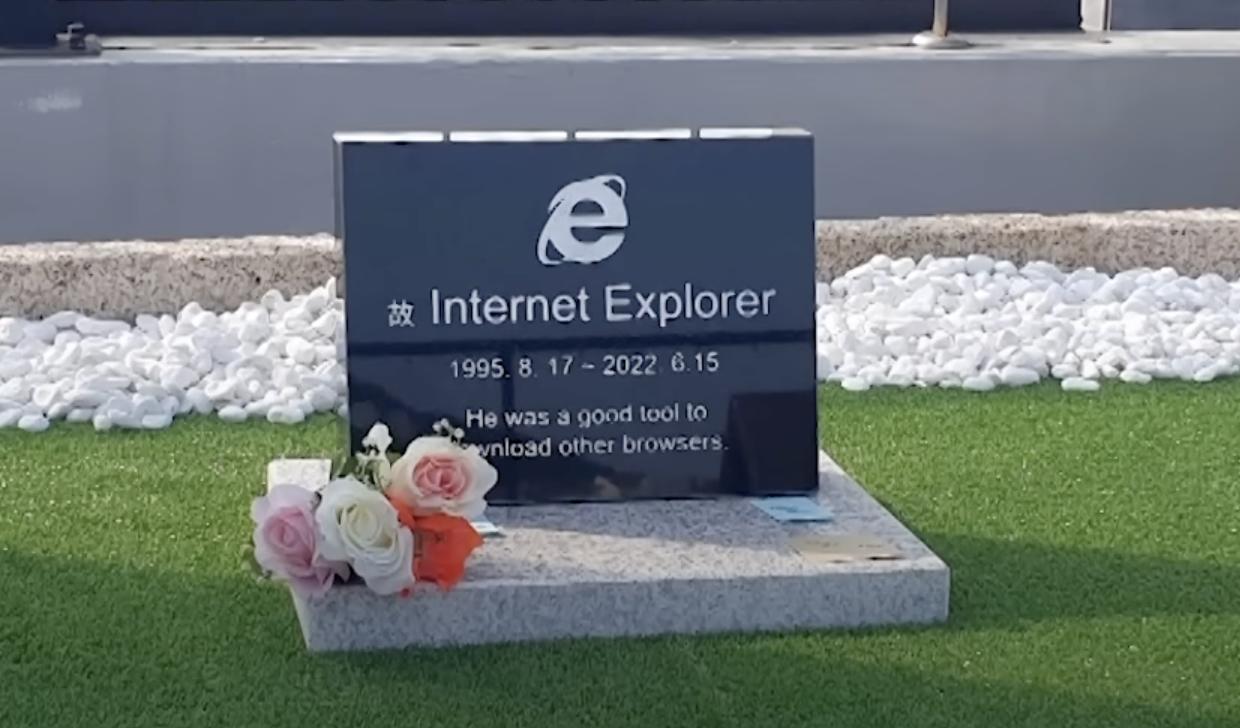 The era of Internet Explorer is officially over. To mourn, software engineer Jung Ki-young from South Korea designed and installed a gravestone for the browser.

In May 2022, Jung began his work designing and ordering the headstone. Adorned with the Explorer’s famous “e” logo, the stone bears an English epitaph that reads: “He was a good tool to download other browsers.”

The 430,000 won ($330) headstone was installed on the rooftop of Jung’s brother’s cafe in Gyeongju in the southeastern region of South Korea. It was at the cafe that Jung hosted Explorer’s memorial. After Explorer’s memorial service, Jung’s gravestone roared across the internet, beloved by fans and haters of Explorer alike. Even the stonemason whom Jung commissioned for the job reportedly asked him, “Is this for real? Why doesn’t it have a human name? Is this something weird?”

Jung noted his complicated relationship with the old browser: “[I]t takes one and a half times more effort to use it compared with other programs, but Internet Explorer also has historical meaning and a great role… It was a pain in the ass, but I would call it a love-hate relationship because Explorer itself once dominated an era.”

When working on Explorer, many users complain that the browser takes notably longer than other online apps to process and complete their requests. Jung specifically struggled to confirm the desired operation of his coding programs when working on Internet Explorer.

Despite these common frustrations with Internet Explorer, the program remained the default browser of South Korean banks and government offices until its death in 2022. Until it was officially retired, many of Jung’s clients insisted that their websites look professional and operate smoothly in the browser.

After its launch in 1995, Explorer enjoyed an illustrious 27-year-long career before its close. In the initial years of its lifespan, Explorer was globally the leading browser due to the abundant offerings Microsoft included with the app. In the late 2000s, however, with the launch of Google Chrome, Explorer began a slow decline, eventually known best as the punch line of dozens of memes and online jokes.

Jung’s intention, reportedly, with this memorial was to culminate Explorer’s legacy of humor with one final “world-class joke.”  He credits this as “another reason for me to thank the Explorer.”

“It’s gone, but I won’t miss it. So its retirement, to me, is a good death,” Jung concluded in his conversation with Reuters.

Interested in reading more about the latest viral trends across social media? Click here to read about the man who ruined a Disneyland proposal, and the empowered responses of fans across the internet.