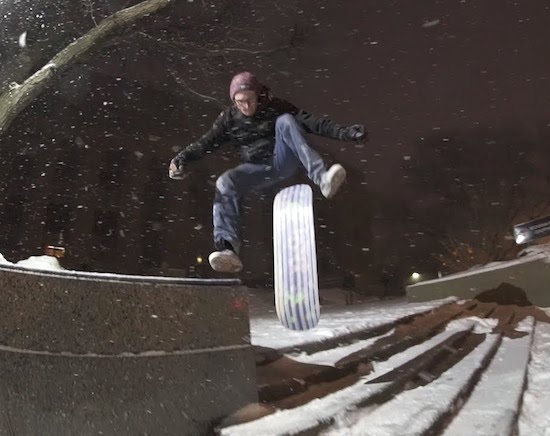 Put on your brain bucket and look out for death cookies!

Shreddin’ The Gnar, Tearin’ It Up, yard sale. I can only guess what these snow skating colloquialisms mean but if you know your jibs from your stalls and your grinds from your switches then this might be right up your half pipe.

If your familiar with snow skating (a kind of a cross between snowboarding and skateboarding which allows the skater to pull off awesome skate tricks on snow) then chances are you’ll have heard of Jeremy Manson.

The Canadian based company “Ambition Snowskates” founded in 2004 recently announced they will release their seventh feature-length project titled “Solstice” in December this year. To get fans excited for some crunchy moves, I think crunchy means cool? They’ve released this clip of pro team member Jeremy Manson tearin’ up some pow. I think that means doing some rather impressive tricks on snow.

I’m sure you agree that Manson’s got some pretty crunchy moves in that clip. I hope he doesn’t faceplant into some yellow snow though.

I wouldn’t hold my breath for a white Christmas this year but if you do fancy giving snow skating a go you could head to any number of indoor snowboard and ski centres across the UK.

Personally I’m content to watch the pros shred the powder. It looks pretty cold out there and I’m much happier in front of a fire whittling spoons. Tell us what you think of Manson’s moves or your powder plans in the comments below.

Here’s another snowy sports article for you to roll around in.