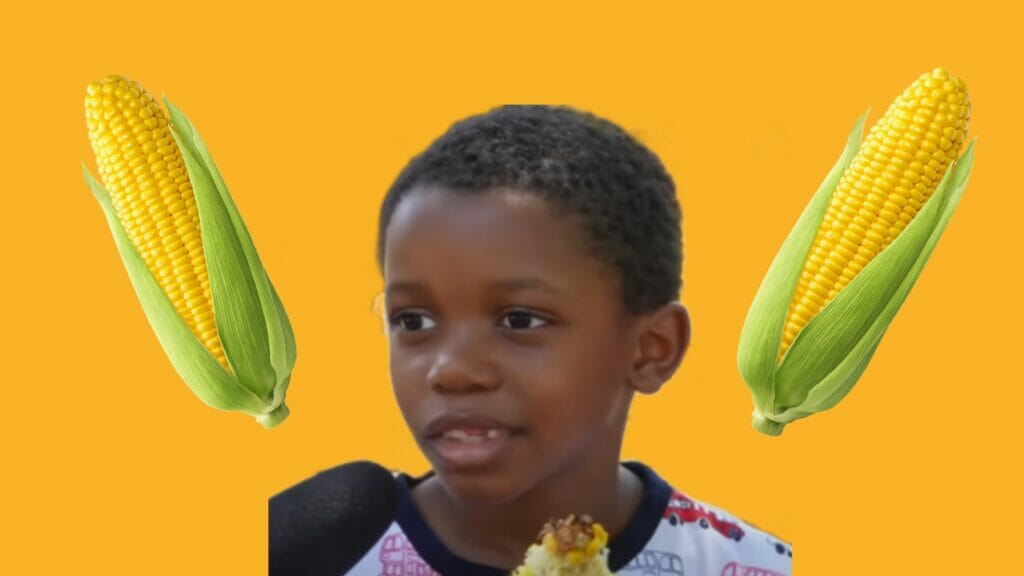 If you’ve been on any social media platform over the past few weeks, you’ve probably encountered the corn kid.

In an interview by Julian Shapiro-Barnum on Recess Therapy, the corn kid enthusiastically shared his love of corn. Tiktok has gone crazy over the adorable video since it was posted at the beginning of August. Since then, a song remix of the video by the TikTok account @schmoyoho has made the corn kid go even more viral. Between the wholesomeness of a young boy expressing his love for a vegetable and the adorable way he pronounces the word ‘corn’, it seems the internet can’t get enough of him.

Recess Therapy is a YouTube series that interviews kids aged 2 to 9. The original corn kid video, titled “The CEO of Corn” was posted by Recess Therapy on the 4th of August. In it, Tariq (AKA corn kid) was asked if he likes corn, to which he replied: “For me, I really like corn. Ever since I was told that corn was real, it tasted good.” He goes on to describe corn as “a big lump with knobs. It has the juice, it’s the part that makes me like the corn.” Obviously, all of Tariq’s comments are hilarious and had the internet quoting them endlessly.

However, the corn kid didn’t go viral until The Gregory Brothers (@schmoyoho on TikTok) remixed the interview into a song. The ‘It’s Corn’ song has over 450 million views and has been used in over 234K videos.

The song inspired countless TikTokers to use the sound to share what they love and express how much they love corn.

Others have been making TikToks about how catchy the tune is. The Corn Kid song is living rent-free in many peoples’ heads.

The Corn Kid is a welcomed wholesome meme

The memes of 2022 so far have been more cursed than cute, such as the Will Smith and Chris Rock slap and Boris Johnson’s resignation. People love the corn kid because the video is so pure and adorable. The humor doesn’t come from a bad event or taking a jab at a certain group, it’s just a kid being enthusiastic about his favorite vegetable. It’s reminiscent of older wholesome memes which came from interviews with kids, such as ‘I like turtles’ boy. The Gregory Brothers were also responsible for early meme songs such as ‘Double Rainbow’ song in 2010. Some of the corn kid’s popularity comes from nostalgia for the meme song format of the 2010s.

The corn kid craze is something that everyone can laugh at and it’s just truly heart-warming to watch someone talk about something they like, even if it’s just a tasty snack.