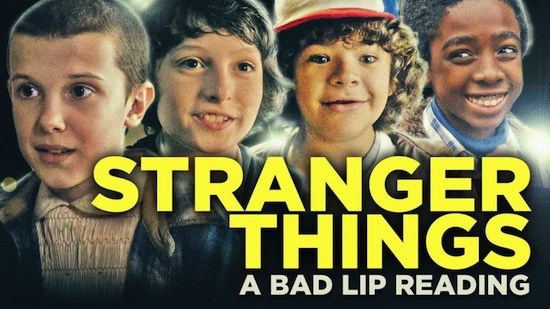 This Bad Lip reading of ‘Stranger Things’ is hilarious and a must-watch.

The return of ‘Stranger Things’ was definitely one of the better things to come out of 2017. In this hellish world that we live in, sometimes it’s nice to just kick back and watch a bunch of kids from the 80’s deal with hellish worlds instead. And of course, we get the YouTube parodies that come along with it.

Bad Lip Reading is a YouTube channel that, well, does bad lip readings of popular TV shows and films. Even though it’s called ‘Bad Lip Reading’, the lines are actually quite well-dubbed which only adds to the hilarity. And this time they’ve decided to take on ‘Stranger Things’. Personally, I’ve been waiting for this for a while now. I wanted to see how drastically they could change the tone of the show and they didn’t disappoint. In this video, the show resembles some sort of really bizarre (but funny) 80’s sitcom.

It’s a full 18-minute long video which is a lot longer than their general content which usually clocks in at around 5-minutes, so you can see the effort that went into it.

Not to mention, it’s endlessly quotable.

And don’t worry, for anyone who hasn’t seen season 2 yet I promise there are no spoilers (watch out if you haven’t seen the first season yet, though):

And if you wanna see more ‘Stranger Things’ parodies, have a look at this article.