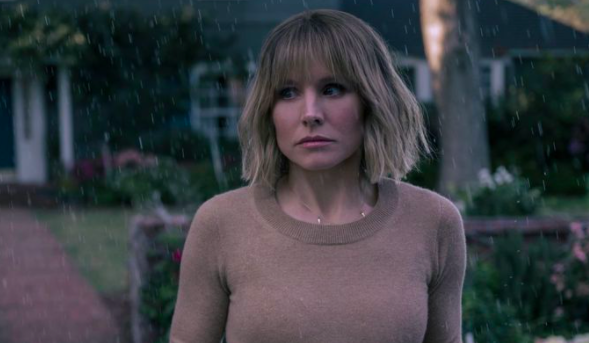 Netflix’s latest psychological thriller centers around someone who spots something peculiar going on in a nearby house, and as they strive to find out the truth, they begin to spiral.

What’s most interesting about this plot is that it’s been done, time and time again. In fact if someone described this very plot line, several films, shows, and books would come to mind: The Woman in the Window, and The Girl on the Train for instance.

There’s a whole genre in fact, which most likely stems from the Alfred Hitchcox’s Rear Window.

So what makes Netflix’s new psycho-thriller The Woman in the House Across the Street from the Girl in the Window different, and what makes it worth watching?

Starring Kristen Bell (The Good Place) as the lead, the show focuses on a woman named Anna, who ‘obsesses over the hunky neighbor over the street’. It’s through this obsession to watch him that Anna supposedly witnesses a murder, all whilst ‘mixing wine, pills, and casseroles’.

Just like similar titles in the genre, Anna becomes obsessed with trying to solve the crime, but there’s a twist: This story doesn’t take itself too seriously.

If the title didn’t already give it away, this show is a parody of the crime and mystery genre (much like Scream is a parody of slasher horror). Anna takes on the stereotypical characteristics of previous roles in her hunt to find out the truth.

Although the series just dropped, it’s already topping Netflix’s viewing charts. Although must of us lap up whatever new show Netflix drops as we feel we’ve already watched everything humanly possible, the 8 part series is made up of 30 minute episodes, and the constant twists make it the perfect bingeable show.

One viewer commented on Twitter, ‘It’s a fun parody of the distressed white woman psychological thriller genre. Kristen Bell’s great in it. Has some good twists and a WILD unpredictable finale. The Woman in the House Across the Street from the Girl in the Window is also super bingeable and shorter that it’s title.’

Another fan wrote, ‘the woman in the house across the street from the girl in the window is genuinely such a delightful show i’m having the time of my LIFE.’

Whilst many are appreciating the parody aspect of the show, some viewers seem to have completely missed the point by not realising that it’s poking fun at the genre.

One confused Twitter user commented, ‘I don’t get what The Woman in the House Across the Street from the Girl in the Window was meant to be. A “Dark Comedy” that only attempts humour rarely & whenever it does, fails miserably? I love Kristen Bell but this was … lame.’

It seems that this is the type of series you’ll have to draw you on conclusions on based on finishing it. If you haven’t started it yet, The Woman in the House Across the Street from the Girl in the Window is available for streaming on Netflix now.

If you have seen it, we’re eager to know your opinion!