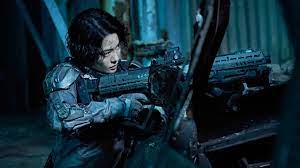 Jung E is a forthcoming Korean Netflix Original dystopian sci-fi thriller written and directed by Yeon Sang-Ho of Train to Busan. Despite being the author of the Hellbound manga, this is Sang Ho’s first ever Netflix production.

When will Jung E be available on Netflix?

Previously, Netflix put Jung E on its 2022 film schedule. However, the release date of Jung E has been pushed back to 2023, with no official release date.

Given that Jung E was supposed to be released in 2022, we predict the Korean sci-fi film to come in the first quarter of 2023.

What is the story of Jung E about?

“Set in the 22nd century, climate change has caused the planet to become uninhabitable, and humans live within a man-made shelter. A war takes place within the shelter. Jung Yi is the elite leader of the allied forces. She becomes the subject of a brain cloning experiment. The cloning experiment is a potential key to win the war.”

When was Jung E shot?

The film is now under post-production and will be available on Netflix soon.

Who are the Jung E cast members?

Kang Soo Yoon, an award-winning and trailblazing actor, plays Seo Hyun. Jung E was Kang Soo Yoon’s first film role in over a decade, after Jury in 2013. Unfortunately, Jung E is the actress’s final on-screen appearance as she died on May 7th, 2022, at the age of 55 due to a brain hemorrhage.