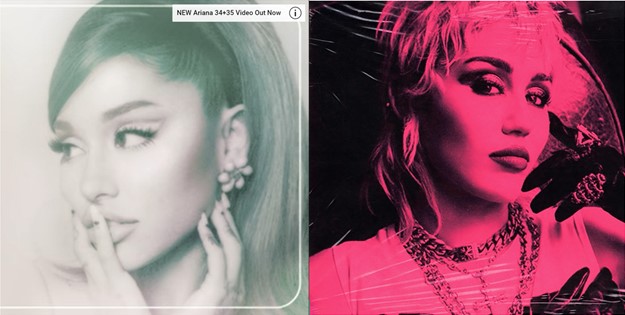 This year has been full of stressful confusion, that’s for sure. But with the very bad came the very good – many musical artists created fantastic albums for us to listen to. Music has given us all an outlet from our hectic lives. Check out some of the best and surprising albums of 2020 below!

Miley has created an incredible album filled with rock anthems and heartfelt lyrics. Plastic Hearts released on November 27th and has since provided listeners with a full body of amazing music. The album includes 15 songs, which include a mix of incredible covers, collaborations, and solos by Miley. The collaborations include songs with Dua Lipa, Billy Idol, Joan Jett, and Stevie Nicks! Check out this performance of Miley singing the title track to her album, Plastic Hearts.

Another wonderful album that was released on October 30th is Sam Smith’s Love Goes. The body of music includes 17 songs full of emotion and melody. If you are looking for an album to dance and cry to – look no further! Sam has created beautiful solo songs as well as collaborations with Demi Lovato, Normani, Labrinth, and Burna Boy to create the ultimate album. Check out this beautiful performance of Love Goes by Sam Smith and Labrinth live at Abbey Road Studios!

Ariana has blessed us with more music! After an impressive Sweetener World Tour that blew everyone’s minds in 2019, the vocal legend has graced us with another full album for 2020. On October 30th, (yes, we got new music from Sam and Ariana on the same day!) she released Positions, her 7th album. This includes 14 songs and collaborations with The Weeknd, Ty Dolla $ign, and Doja Cat! This album oozes love and angelic vocals, so go give it a listen! Check out her timely and iconic music video for Positions.

That’s right – Hot Girl Meg released two albums this year! Suga was released on March 6th and has 9 powerful songs, with collaborations with Kehlani and Gunna. Good News was just released on November 20th, and includes 17 songs. Megan Thee Stallion is in everyone’s playlists, and has some amazing collaborations on Good News, like songs with SZA, Big Sean & 2 Chainz, DaBaby, Young Thug, the one and only Beyoncé, and more! If you want to be in the best mood and feel confident, listen to Hot Girl Meg! Check out her amazing performance from the AMAs.

Folklore and Evermore by Taylor Swift

Another artist who has surprised us all this year with two albums is Taylor Swift. Known for her catchy melodies and literature-like lyrics, Taylor has given us so much music this year to enjoy. She released Folklore on July 24th, with 16 songs and we were all impressed. Evermore was just recently released on December 11th, and fans were shocked. This albums holds 15 songs. Both albums feature a collaboration with Bon Iver, while Evermore also has songs with The National and HAIM. Both albums capture the various emotions of 2020 and shine in their own way. Check out the music video for Willow, a beautiful song off of Evermore.

These musicians and many more have given us so many songs to lose ourselves in this year. What is your favorite album of 2020? If you found this article interesting, check out this one on the biggest cultural moments of 2020.